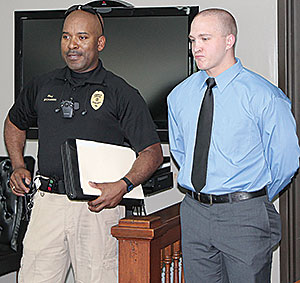 The Humboldt Board of Mayor and Aldermen made quick work of a short agenda last week. The meeting took around 30 minutes.

Resolution 2019-06 gave Humboldt Utilities the go-ahead to proceed with adding a new well at the water treatment plant beside Bailey Park.

Two bids were submitted for the water project. Layne Christensen Company had the low bid of $402,640, compared to Miller Contractors’ bid of $552,838.

According to the resolution, Layne Christensen is tentatively awarded the bid contingent on approval from the Tennessee Department of Environment & Conservation, State Revolving Fund Loan Program. The resolution also noted the low bid was within the available funds budgeted for the construction.

The resolution was approved 4-0. Alderman James Shivers was unable to attend the meeting.

Next, Resolution 2019-07 was presented that would allow Humboldt Utilities to move forward with water treatment plant improvements.

The resolution was approved unanimously, 4-0.

After the meeting, Humboldt Utilities General Manager Alex Smith briefly described the scope of work for both projects. He said a new well will be constructed at the water treatment plant that will be 16-inches with a capacity of 1,600 gallons per hour. The improvements to the treatment plant call for new aeration equipment and controls.

The final city board agenda item was hiring a new police officer.

In a letter submitted to the board from Humboldt Police Chief Reynard Buchanan, the chief recommended Devin Grisham be hired. The letter stated Grisham had passed a medical exam, drug screen, psychological evaluation and the national police officer selection test, and had met all requirements of Tennessee law to become a law enforcement officer.

Chief Buchanan noted Grisham is an excellent candidate and would be an asset to the Humboldt Police Department.