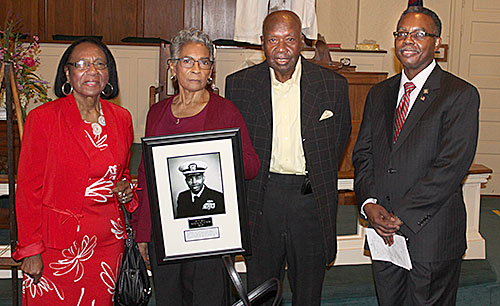 CLAY IS INDUCTEE –  Lt. Commander Orin Bret Clay was inducted into the 2019 Humboldt Hall of Fame. Lt. Clay served multiple deployments on three vessels to over 20 countries after he graduated from the U.S. Naval Academy in 1989. During his shore assignments, he served at NATO and the pentagon before being combat deployed to Iraq in support of Operation Iraqi Freedom. His military awards include the Meritorious Service Metal, Joint Commendation medal, Navy Commendation Medal, Army Commendation Medal, and the Navy Achievement Medal.  Presenting Orin with his Hall of Fame frame is Chamber director Amanda Love.

HOMETOWN BISHOP INDUCTED – Bishop G.E. Patterson was born in Humboldt in 1939. He later moved to Memphis where he founded the Bountiful Blessings Deliverance Church Inc. Among his other many accomplishments, he organized eight other independent churches, was president and GM of WBBP-AM, offered a prayer at President George Bush’s inaugural Prayer service at the Washington Cathedral in 2005, and was nominated for both a Grammy Award and a Soul Train Music Award in 2006 and received a Stellar Award for Traditional Male Vocalist of the year in 2007. On behalf of the Bishops family and friends Doreen Graves, Chief of Staff of Beautiful Blessings Deliverance accepted the Hall of Fame frame from Chamber director Amanda Love. 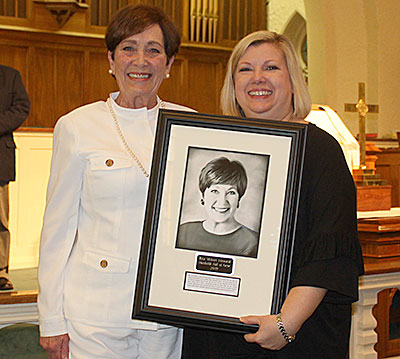 HOWARD INDUCTED – Rita Howard, along with her husband Peter, were inducted into the 2019 Humboldt Hall of Fame. Howard’s many accomplishments, including her many national beauty/talent honors, baton-twirling Hall of Fame induction, professional acting career and her time as CEO of the HRH Vineyard and Crown Winery that her and her late husband established in 2000.  Chamber of commerce Director Amanda Love presents Howard with her Hall of Fame frame. 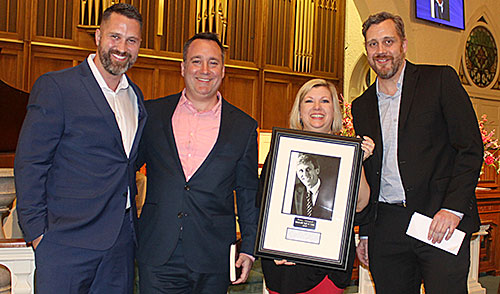 HUMBOLDT’S ENGLISHMAN INDUCTED – Alongside his wife Rita, Peter Howard was posthumously inducted into the 2019 Humboldt Hall of Fame. Peter’s many accomplishments are numerous and varied. This devoted father was a gas physicist, engineer, inventor, scientist, real estate developer, farmer, poet, athlete, and vintner who, with his wife, built the largest vineyard in Tennessee.  Amanda Love presents Peters Hall of Fame frame to his three sons Winston, Doug and Peter Howard.