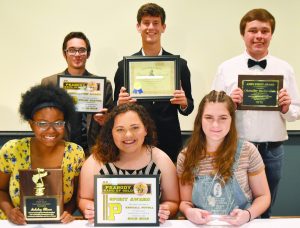 Steven Westbrook, who has completed his 10th year as director, presented awards to students and band boosters. He started by recognizing a small but mighty senior class.

“What this group of seniors lacks in total numbers, they make up for in personality,” he said.

Years ago, Westbrook adopted the practice of giving seniors harmonicas instead of plaques. He explained his reasoning to the crowd. When Westbrook was a child, he found a harmonica in his father’s bedside table drawer.

“I think that was one of the first things that made me love music,” he said. “That was a really big deal for me.”

Westbrook said after his first couple of years at Peabody, he asked a former band member what he had done with the plaque he received as a senior. The student answered honestly, “I think it’s in a drawer somewhere.”

Westbrook said he would rather give a harmonica that might get shoved in a drawer but could be rediscovered by a child years down the road.

“Maybe your kids will find it some day and love music,” he said.

Several underclassmen were also recognized. Westbrook asks band members to vote for their peers for the Most Improved and Outstanding Awards.

“It’s very interesting to see how they look at things,” he said. 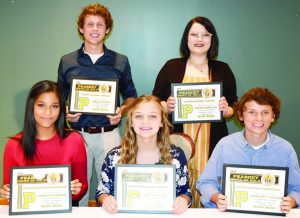 Westbrook and Beth Nowell, president of the band booster club, recognized several parents for their contributions throughout the 2018-19 season, which Nowell said was the rainiest in her memory. 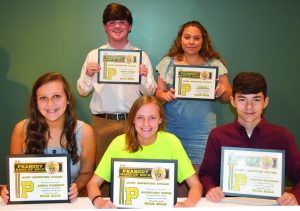 Westbrook introduced the 2019-2020 field commanders and officers. Field commanders undergo tryouts, while officers apply for positions and are voted on by the peers.

The next field show the Peabody Band of Gold will undertake is called A Moment Captured.

“We can do a lot visually,” Westbrook said. “We’ll be able to create a lot of little pictures.”

Westbrook said the music would be competitive and said he is excited about the new show.