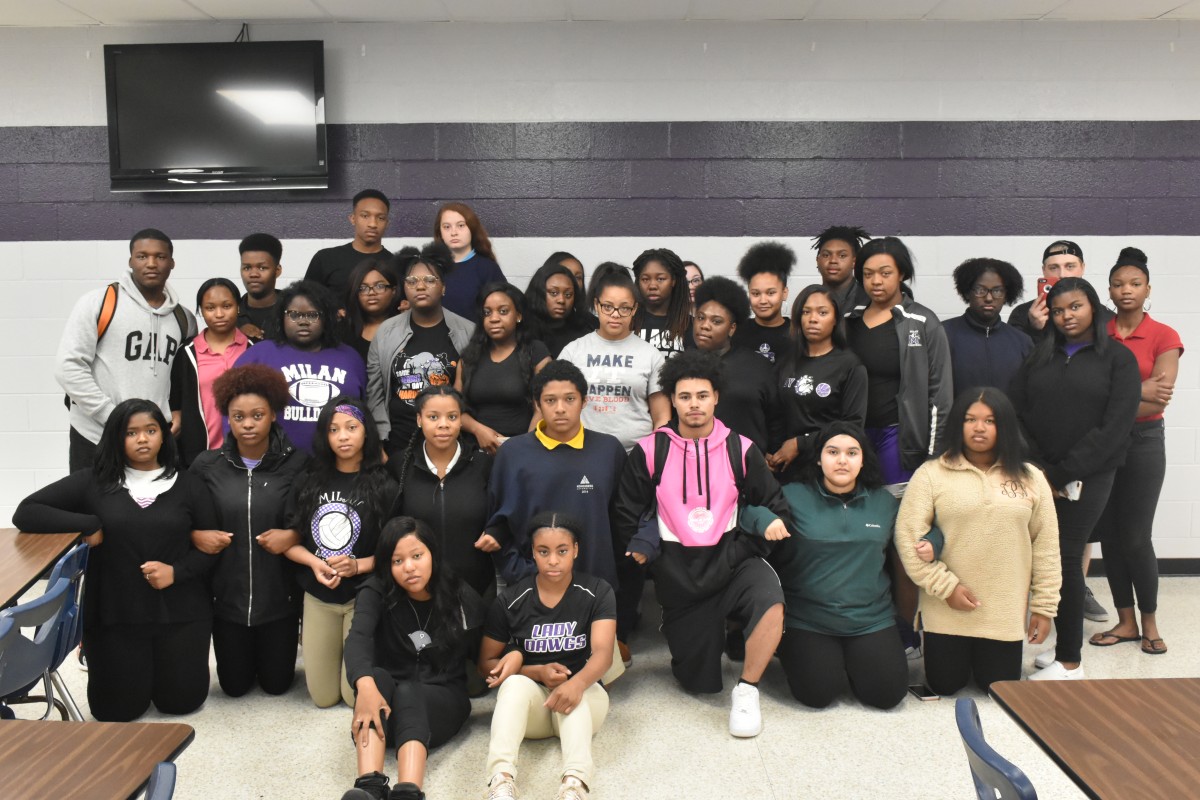 MHS STUDENTS STAGE PROTEST – African-American students and supporters held a quiet protest Friday morning inside the MHS cafeteria in response to a noose being found inside the school. Some students noted that they did not feel safe, responding to the incident as a “hate crime” and racial intimidation, but reports from several sources indicate that the incident was not intended to appear racially motivated. Photo by Logan Watson.

African American students at Milan High School staged a peaceful protest Friday morning following an incident that occurred last Wednesday. More than 30 students sat quietly in the school’s cafeteria rather than go to class in order to make a statement against what they perceived as a hate crime.
According to the students, a noose was found in the CTE Building, placed there by a juvenile female. The student was reportedly disciplined on Friday, resulting in a suspension, but some of the students did not feel that the school’s administration acted swiftly or strongly enough.
“This is not a resolution to the problem,” said Alijah McAlexander. “As a minority, I feel we deserve justice.”
Students stated that they felt that their rights as Americans had been violated, with some going so far as to say that they did not feel safe.
“Black or white, students should not have to feel this way when they come to school,” one student added.
“I feel threatened,” said one girl. “This is something that we should know about.”
Reports from sources at the school indicated that the incident was, in fact, not racially motivated at all, but an issue involving a troubled student. However, Director of Schools Jonathan Criswell told the Mirror-Exchange that he could neither confirm nor deny those rumors.
“The student was removed and placed in In-School Suspension until the incident could be investigated,” Criswell said. “Our threat assessment team looked into the ‘how’ and ‘why’ of what happened and, based upon the evidence, the student was suspended. The matter will be addressed by our Disciplinary Hearing Authority.”
While rumors of the incident set off a heated discussion online and worried some parents, Director Criswell stated that he was proud of the way the students involved in the protest responded to the situation.
“There was some misinformation being spread around,” Criswell explained. “They were told that the student was not being punished, but once Principal Scott and I took the time to speak with them and answer some of their questions, we all reached an understanding.” “The students asked some really good questions and we did our best to answer them and put them at ease,” Criswell said. “We support them in their efforts to have their voices heard. We told them, ‘Our country has a past, and some people don’t always do the right things, but we want you to be the generation that stands up and moves society forward.”