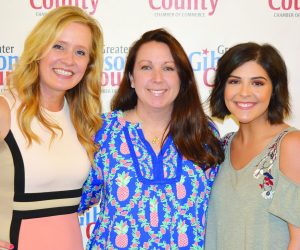 Megan Flowers, a native of Gibson County, is the administrative assistant at Tyson Foods in Humboldt. Her coworkers described her as organized, friendly and willing to do whatever it takes to make the Tyson team successful. Flowers was also lauded for her positive and encouraging attitude.

Prior to joining the Tyson team, Flowers worked for 10 years at Click1. She is a member of Sugar Creek Baptist Church in Humboldt.

Power in the pineapple

This year’s theme was, “Be Like a Pineapple: Stand Tall, Wear a Crown & Be Sweet on the Inside.” Miss Tennessee 2018 Christine Williamson had to cancel her appearance a week before the luncheon, leaving Libby Wickersham, chamber director, scrambling. Though Vanessa Presson, HR manager for Tyson Foods in Humboldt, and Aly Griggs, a member of Endless Highway, might not have Williamson’s pageant cred, they were fully qualified to replace her as the keynote speaker and entertainer, respectively.

Wickersham told the crowd she found out April 18 that Williamson’s doctor had ordered her to stay home.

“We were bummed about that, but we knew that we had the best replacements,” she said.

Griggs sang three songs, playing guitar on each one. Her renditions of “Grandpa, Tell Me ‘Bout the Good Old Days,” and “26 Cents” brought several in the audience to tears. She also sang, “How Marvelous, How Wonderful.”

Presson dissected the power in the pineapple in three points.

Stand tall – “Be proud of all you do,” Presson encouraged. “Know your value and worth. Keep up with your own accomplishments. Don’t expect your manager to do it for you.”

Wear a crown – Presson noted that the crown of a pineapple can regenerate and grow new fruit. She advised the audience to continue to grow and learn, making their jobs their own while looking for ways to add value and interest to their jobs.

Be sweet on the inside – “Being kind and compassionate goes a long way,” Presson said. “We all know that a superstar employee with a bad attitude is harder to work with than a lower performing employee with a sunny disposition. Be the person at work that focuses on success and celebrates the success of others.”

Presson began her career as an administrative assistant and said the position should never been underestimated. 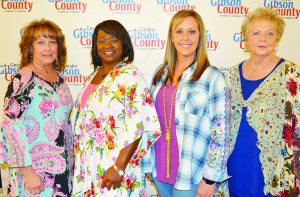