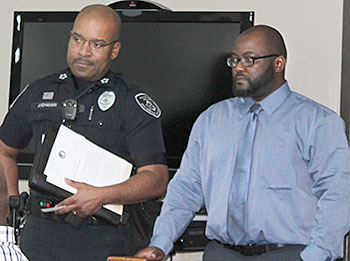 NEW POLICE DISPATCHER – Clifton Davis (right) stands before the Humboldt City Board last week after being recommended to fill the vacant dispatcher position with the Humboldt Police Department. Police Chief Reynard Buchanan (left) recommended Davis for the job. Davis previously worked for the HPD as a patrolman for 12 years. Prior to Davis’ approval, the board had approved the resignation/retirement of dispatcher, Jerry Gordon.

The Humboldt City Board of Mayor and Aldermen met for their bi-monthly meeting last week with a short agenda. Two items up for discussion pertained to dispatchers with the Humboldt Police Department.

Police Chief Reynard Buchanan received a letter from police dispatcher, Jerry Gordon. In the letter, Gordon submitted his resignation for retirement. Gordon was associated with the department for seven and a half years.

Humboldt Mayor Marvin Sikes asked for a motion to approve Gordon’s resignation. Alderman Don Graves made the motion, which was seconded by Alderman Leon McNeal. The vote was unanimous, 4-0. Alderlady Donna Johnson was unable to attend the board meeting.

After Gordon’s resignation was official, the next order of business was to hire his replacement. Chief Buchanan submitted his letter of recommendation to the board to hire Clifton Davis as a full-time dispatcher.

Buchanan stated Davis had passed the National Dispatcher Selection Test, medical exam, drug screening and had fulfilled all other requirements for the city of Humboldt.

Davis had previously served on the Humboldt police force for 12 years. He was the SRO (school resource officer) at Humboldt Jr./Sr. High School for a couple of years before resigning from HPD.

The board approved hiring Davis as dispatcher and welcomed him back to the force.
Chief Buchanan said Davis’ first day would be April 9.

In other board action, two bids for tractors were presented. Parks & Rec. Director Jeff Graves had requested a new tractor.
Tennessee Tractor’s bid was for a John Deere with a quote of $19,800. Byrd Implement submitted a bid for a Kubota tractor at $19,300.

Mayor Sikes and Graves recommended the board approve purchasing the John Deere.

Graves told the board he preferred the John Deere since he had the same exact model at a previous job and it was perfect for the work needed. Graves said he was not familiar with the Kubota. He said he was not saying the Kubota was not a good tractor, only that he had never used one before.

Alderman Leon McNeal said he was fine going with Graves’ request since the prices were very close.

Mayor Sikes noted purchasing a tractor was in the city’s budget with a $20,000 amount.

The board accepted Tennessee Tractor’s bid for the John Deere.

During the February fire report on the agenda, Mayor Sikes told the board that the Humboldt Fire Department was still short six positions. He asked Assistant Chief Leroy Kail for an update.

Kail said the department would have four coming in Friday, March 29 for testing. He was hopeful to get two or three good recruits.

Kail told the board that Humboldt was not alone trying to find qualified people for the firefighter jobs. He said it was not just small towns either. Bigger cities are having trouble filling their department, Kail said.

Mayor Sikes said that was true of not just fire departments, but jobs in general. He noted the 4-percent unemployment rate and that it was hard to find people. The mayor said the people that want to work are working.