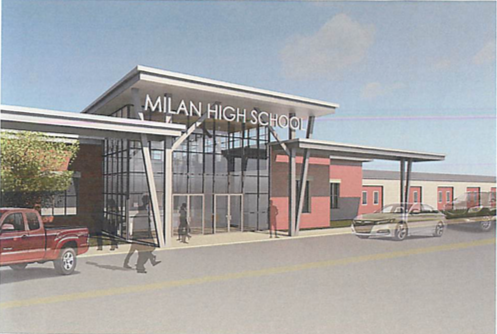 A mock-up of the proposed front entrance to Milan High School. The MSSD Board of Education will meet with the community Tuesday night to get input on the renovation project.

Community members will have an opportunity to give their opinions on the upcoming renovations to Milan High School next week as the MSSD Board of Education and representatives of TLM, Associates meet to make preliminary decisions regarding the 40-year-old facility.
The upcoming meeting is scheduled for 6:00 p.m., and will be held inside Milan High School so that interested members of the public would be able to have a better understanding of some of the changes that had previously been discussed by the board.
“TLM will have drawings, and we will walk people through the school so that they will be able to see first-hand what we are thinking about for possible renovations,” said Director of Schools Jonathan Criswell. “We are going to look at the security of the front entrance, adding restrooms, changes to the cafeteria, and we will also get a better idea of how the CTE renovations will go.”
Criswell added that the board is also seeking the public’s reaction on what direction the future of the Mayo-Wheeler Gymnasium should take.
“We are going to have a discussion about what should be done there, in terms of adding an auxiliary gym or possibly creating some type of indoor facility that can be used for sports, band or other events.”
Criswell also stated that TLM will have some designs for the renovations to Johnnie Hale Stadium as well as the high school for public viewing at the April 2 meeting. Currently, renovations to the stadium have a tentative start date of late November 2019, but a more concrete schedule will be set once the MSSD Board signs off on their final decision this summer. Future public meetings of the MSSD Construction Committee will be announced as they are scheduled. 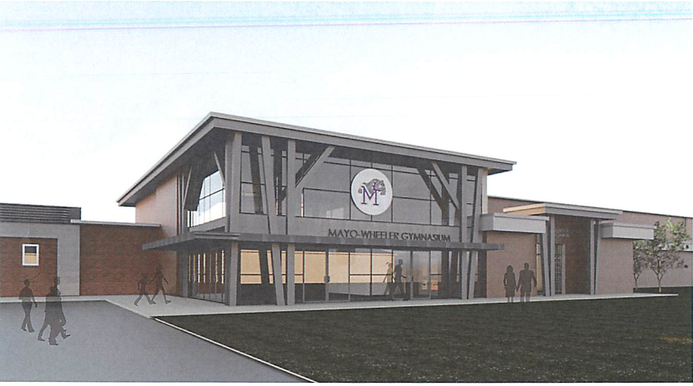 A design for a potential rear entrance to the Mayo-Wheeler Gymnasium. The MSSD wishes to gauge the interest of the public on adding an auxiliary gym or indoor practice facility.

“We encourage everyone that is interested in the future of Milan’s schools to come to these meetings,” Criswell stated. “We want to let people hear our ideas, but we want to get input from them as well.”

SCOPE Students Recognized – Milan High School students Keilee Webb, Grayson Jones, Maicy Warwick and Sutej Sandhu we recognized for their participation in the Student Congress on Policies in Education (SCOPE) on March 5 at  Middle Tennessee State University. SCOPE, now in its 37th year, is designed to give students a voice in public education issues and to involve young people in finding solutions to problems in education. Attendees participate in mock school board sessions, taking on the roles of board members, school officials, parents, students and concerned citizens. Students also led debates on some current policy issues, such as graduation requirements that include multiple pathways for students to graduate with a regular high school diploma, the option of substituting a club sport for a physical education requirement, fighting on school grounds or during school activities being considered zero-tolerance offenses and schools adopting the Latin System (summa cum laude/magna cum laude/cum laude) for graduation exercises rather than selecting a valedictorian and salutatorian. The four students from MHS also took part in the SCOPE conference last year, and noted that they were more knowledgable about the processes and intricacies of school boards thanks to their previous experience.
The board also recognized Logan Gonzales for his success in the casting call for the Food Network competitive cooking series, “Chopped Junior.” Gonzales applied to be on the show and dazzled producers with his creativity and personality. Gonzales advanced through three rounds of casting cuts. 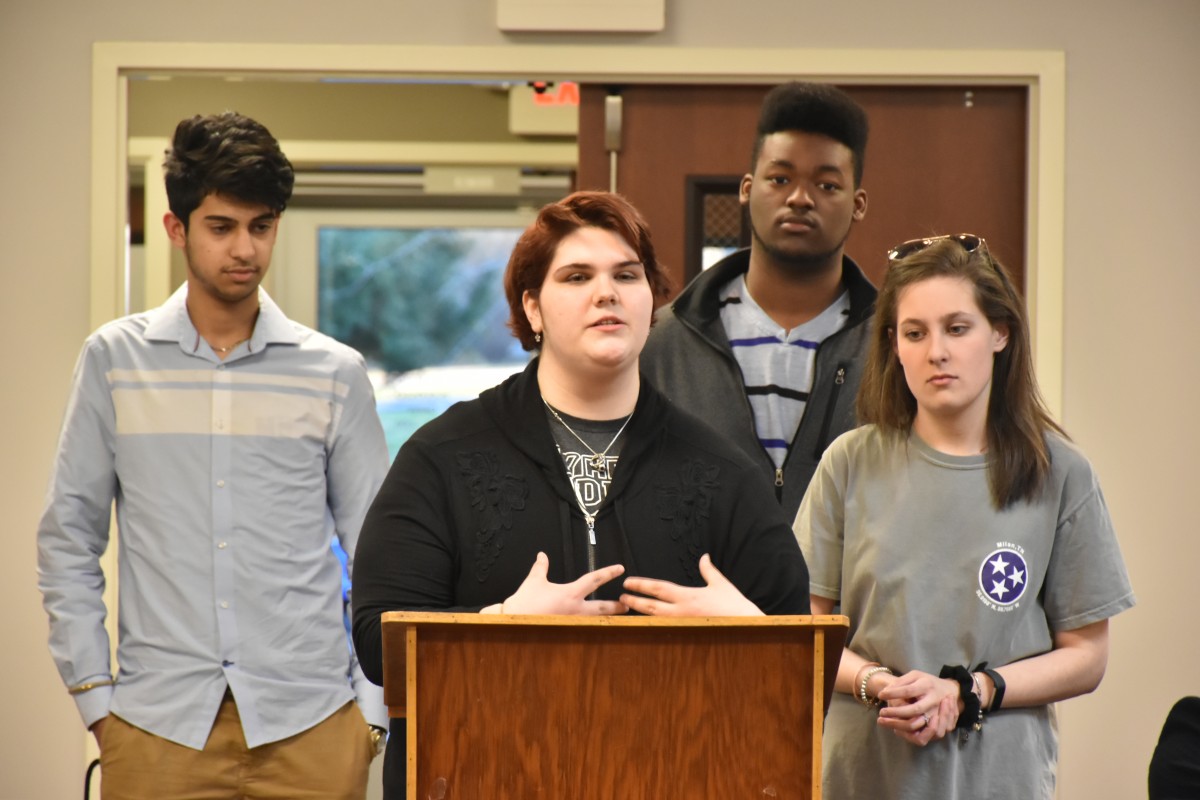 Parent Appeals Zero-Tolerance Violation –  After a brief discussion, the MSSD Board of Education voted to hear the appeal of a mother regarding a zero-tolerance violation levied against her son. The mother, son, board members and Director Criswell went into a closed session with school board attorney Collins Bonds for close to 45 minutes before the board meeting began in earnest. Director Criswell stated that no details of the violation nor the appeal could be disclosed to the public.

Director’s Reports – Director Criswell informed the board of the hire of Michael Wilson, who will be taking over as Band Director at Milan High School. Wilson, a native of Tupelo, Mississippi, has been a teacher and band director for 15 years, most recently at Collierville High School. Director Criswell noted that Mr. Wilson had met with the band members and shared his vision for the program with the students.
Criswell also stated that MSSD representatives had attended recruiting events at the University of Tennessee at Martin and Union University in attempts to recruit more African American teachers to the district. While one of the potential recruits stated that they would not be staying in West Tennessee, the other expressed some interest in working in Milan’s schools. The MSSD will be following up with this individual in the future. Criswell also stated that other school districts have begun hiring teachers earlier in the school year, and noted his desire to make sure that the Milan Special School District has a plan in place to hire teachers as early as possible.
New Grant Budgets – The board approved new grant budgets for Student Support and Academic Enrichment, Trauma Informed Schools the Read to Be Ready summer reading program. CTE Director Candi Norwood stated that the funds from the Trauma Informed Schools grant will go towards the training of staff through professional development with information about how to interact with students who have had “adverse childhood experiences”, whether those manifest as a history of abuse or neglect or other incidents that have severely impacted a student’s mental health. The Read to Be Ready grant will begin its third year this summer. Grant funds will go toward paying teachers and bus drivers, as well as instructional supplies and and additional books for the students to take home. The program is on pace to serve 36 students this summer.

Correction to Director’s Evaluation – Board member Sid Crocker informed the board of an error that was made in the scoring of Director Criswell’s recent evaluation. Crocker stated that the scoring of one of the questions was done incorrectly, but added that after tabulation, the change was not large enough to change Criswell’s overall score of 3.99. 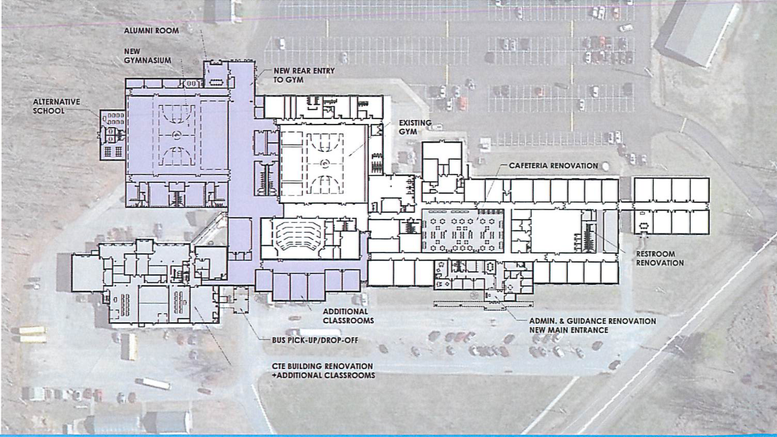 The full proposed floor plan for the renovation of Milan High School by TLM Associates.