For those who had the pleasure of knowing, or just knowing of, Chuck McGill, one word would come to mind—talented. McGill’s God given musical talent was one of the many qualities that made him special.

“As president, you think about people to fill certain roles,” Caraway said of her selecting the dedication recipient. “You think of people who are not only involved in the festival but in Humboldt too. Years past, he’s played at the street dance, opening ceremonies and downtown. I associate him with festival entertainment.”

After deciding on McGill, Caraway called his wife, Paula Bridges McGill. Caraway told McGill it was something she wanted to do and explained how deserving Chuck was.

“That’s wonderful! The girls and I would love that,” McGill recalled her reaction to Caraway’s selection. “I cried”.

“He didn’t like attention,” Paula said of her late husband. “He always wanted to be in the background.”

Chuck and Paula have two daughters, Katie and Emily. The entire family is immensely talented.

“It’s absolutely perfect,” festival general chairman, Betty Langley said of the dedication. “I love all of them. I couldn’t think of anyone deserving it more.”

In McGill’s early years as a youngster growing up right outside of Humboldt, he grew up attending the parades. In those days, water guns and peashooters were lots of fun for the kids. They were later banned. As he got older and started a family, he took them to the parade one year.

“I’m excited,” daughter Katie said of her dad being honored. “A lot of our family would come to the Strawberry Festival every year. This is where he’s from. He always said this is where so much of his love of music came from.

Tom Hay (former HHS band director) had a big influence on my dad.”

McGill got his first taste of playing music in the fifth grade when he joined the school band. He played alto saxophone. Paula said Chuck’s parents, the late Charlie and Kay McGill, loved to hear him play. They encouraged him. That love of music was passed down to his girls. 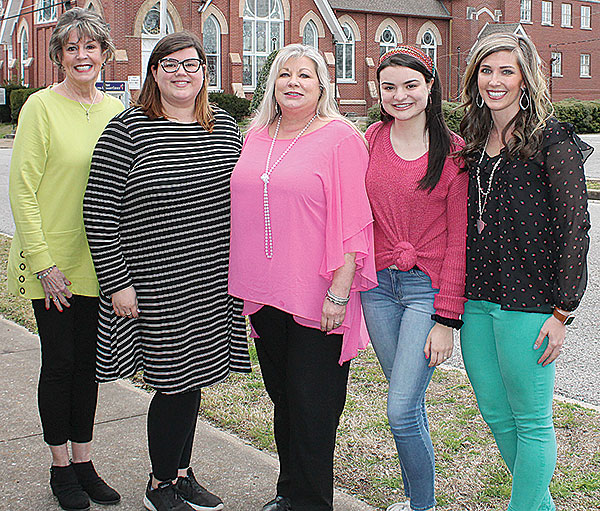 MCGILL FAMILY – Strawberry Festival President Chelsea Caraway (right) and General Chairman Betty Langley (left) are joined the family of the late Chuck McGill who the festival is dedicated to this year. McGill’s wife, Paula (center) and daughters Katie (second from left) and Emily (second from right) are thrilled to have Chuck honored at the 82nd annual West Tennessee Strawberry Festival.

“He taught me to play guitar and saxophone. He loved to hear us practice,” Emily said. “My first song was ‘Only Exception’ by Paramore. He (Chuck) didn’t know it at all but he learned it in about 10 minutes and taught it to me.”

“The first thing he taught me was a blues riff,” Katie recalled. “Then he taught me an Eric Clapton Song. I would play them and dad would solo over them.”

Both daughters learned to play guitar and piano by age 10, Paula said.

As Katie learned to play sax, she taught herself to play “Mary Had a Little Lamb” as a youngster. Katie said her dad was so proud she had learned it on her own.

While attending Humboldt High School, McGill and Caraway’s father, Mike DeBerry, were close friends and would get together on Sunday afternoons playing acoustic guitars. That friendship lasted a lifetime and was one of many factors in Caraway selecting McGill as festival dedication.

As much love as McGill had for music, it did not compare to the love he had for his family. Birthdays and Christmases were always a special occasion, especially for his daughters.

“Every birthday, dad would always wake up before us,” Katie recalled. “He would go to the computer and print off 100s of pictures and have them all over the house. He would clip the pictures and paste all kinds of backgrounds. They (pictures) were everywhere, in the living room, refrigerator, everywhere.”

“He bought us iPads,” Emily recalled one Christmas. “Christmas morning he gave us headphones and we didn’t know what to use them for. Then he went to the kitchen and brought out two apples with big bites out of them, like the Apple logo. When he brought out the iPads, he was so excited.”

“He would buy anything for our stockings,” Katie added. “When I got older, I saw his madness grabbing everything in the store. It didn’t matter if it was for girls or boys. We got men’s deodorant. Once he grabbed orthopedic socks and said, ‘they need socks’, then he’d grab whatever was next.”

“Chuck is an icon in Humboldt,” Caraway said of her dedication selection. “Everyone knows him. He has a highway named after him. He means so much to this town.”