The Mighty Vikings of Humboldt rolled right through the competition in the first two rounds of the State Tournament. Humboldt found themselves preparing for the State Championship against Columbia Academy this past Saturday night.

The Vikings battled hard but some clutch three pointers, and questionable calls left Humboldt with the short end of the stick and the Vikings went home as the State Runner Up.

The Bulldogs and the Vikings faced off in an epic battle Saturday night to see who would take home the gold. Both teams stormed the floor ready to do work. The Bulldogs wasted no time getting to the grind and nailed three from beyond the arc and two baskets. The Vikings did not back down and Trey Ward and R.J. Abernathy both drained a three pointer. Abernathy, Trent Green and Anthony Jones each made a bucket. Humboldt went to the second quarter down by three points 12-15.

Humboldt had to come back from the break ready to fight back if they were going to have a chance and they did just that. In the second half of the game the Vikes were not only fighting the Columbia sharp shooters but also the refs. Questionable calls began to stack up and it seemed as if the Vikes just could not catch a break. The Bulldogs continued their streak in the third quarter and scored another 21 points including three more three pointers. The Vikings battled back. Ward swished one from downtown Murfreesboro and then followed up going four for four at the charity stripe. Jones went to work in the third quarter hitting three baskets and a free throw. Abernathy nailed a bucket before he went two for two at the free throw line. The Vikings went into the final quarter still trailing 37-52. The Vikings finally caught their momentum in the final quarter. Ward hit three from beyond the arc. He then made a basket and a free throw. Abernathy went to work and made three baskets and two free throws. Malik Cox put two points on the board and Jones made a free throw. The Vikings gave it all they had but the Bulldogs had no mercy and scored another 23 big points in the final quarter. Humboldt fell to the Bulldogs 76-60 and went home with the silver ball.

The Vikings finished their season at an impressive 30-4 record. 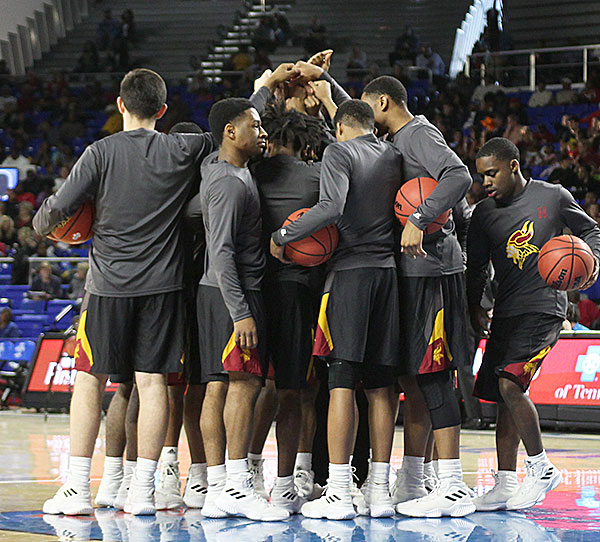 FINAL SENIOR HUDDLE- The Vikings huddled together with their seniors one more time before their champonship game against Columbia Academy. Seniors leading the team this year are: Reggie Manley, R.J. Abernathy, Trent green, Anthony Jones and Montrez Ward