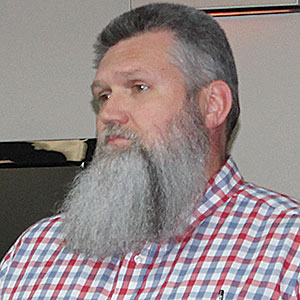 NEW SCHOOL BOARD MEMBER – Mark Hodge was appointed by Mayor Marvin Sikes and ratified by the city board to fill the vacant school board seat. The Ward 3 school board position has been vacant since last summer when Lori Coleman resigned and moved to New Jersey. Later, Terry Gray was appointed and resigned an hour into his first board meeting.

After several months of having an incomplete school board, the empty seat now has been filled. Mark Hodge was unanimously approved by the Humboldt City Board to fill the Ward 3 Humboldt School Board position.

During the February 25 city board meeting, Mayor Marvin Sikes made the recommendation to appoint Hodge for the seat. Sikes said he had spoken with Alderman Don Graves, who represents Ward 3, about Hodge, and Graves approved the mayor’s recommendation.

“I’m pastor of First Assembly of God,” Hodge said, speaking to the board. “We believe in children. I believe in morals and integrity.”

Hodge served on a school board in Missouri and was also a softball coach. He is a foster parent to several kids and has kids of his own.

“I talked it over with my family and kids,” Hodge said. “God puts us in the right place for the right reason.”

“He will be a wonderful (school) board member,” Mayor Sikes added.

The board unanimously approved appointing Hodge to the school board.

In other board discussion:

•Mayor Sikes gave an update on the building inspector position. John Morrison is the city inspector but has yet to pass the certification test. Morrison did not attend the city board meeting last Monday.

The mayor said he spoke with city officials from Medina on how they handle their inspections. He also spoke with city engineer, Terry Drumwright, who is also Medina’s engineer. Sikes said Medina sends all their plans to Nashville for approval. He and Drumwright will get together to discuss how this procedure works.

“If we choose to move forward with hiring an inspector, we’ll have a back-up,” Mayor Sikes said of going a similar route to Medina. “We already have a back-up plan in (Ricky) Bailey with Gibson County.”

“That’s up to the board,” the mayor replied.

There was discussion of moving Morrison to a different position. Morrison was demoted by the mayor with a reduction in pay and not taking a city vehicle home at night or on weekends.

“John’s a good guy but our charter says you can’t take the city inspector and put him in another slot,” Alderman Leon McNeal stated. “We don’t have a slot. We have guys making $7.75 an hour and John’s making $35-40,000. I think we put John on the ditch crew—let John work as a city employee. Let the mayor let him work when needed. I’m for putting him at $12 to $14 an hour. The board has the right to hire, fire and demote.”

City attorney, Terri Crider, corrected McNeal, saying only the mayor can demote. Crider also noted if Morrison is transferred to another position, the pay will have to be equal or more than what his current salary is.

“Let’s see what we can do within the law,” McNeal added. “I don’t want to kick him out the door, but.”

“We’ve given him (Morrison) four years to get certified,” Alderman Don Graves said. “If he can’t (pass the test to get certified), he’s let the board down, the city down and his family down.”

Mayor Sikes said he will speak with Morrison again and will have something more to bring to the next city board meeting.

“We have to make sure we follow policy,” Sikes said. “This has been very hard for me. Sometimes you just have to be done with it.”

Mike Hewitt of Alexander Thompson Arnold CPA presented the city’s audit report for fiscal year 2017-18. He noted the audit was 150-plus pages and includes Humboldt Utilities’ and Humboldt City Schools’ audits as well.

Hewitt said Humboldt does a very good job of keeping financial records and have received the Government Finance Officers Association Certificate Achievement for Excellence in Financial Reporting award for over 10 years.

The reports showed no findings for both internal control and compliance.

“We do a good job of keeping within our budget,” Mayor Sikes said.

The board praised city treasurer, Kim Hadley, for having 19 years of clean audits.

•Mayor Sikes presented two bids for a 15-passenger van for the Senior Citizen Center. He noted the van is included in the city budget.

Senior Center director, Archie Cox, said she prefers the medium roof model since it would be easier on those who visit the center.

Mayor Sikes said the senior center has $35,000 budgeted and the medium roof model was ‘right on the money’.

The board unanimously approved Langley’s bid for the medium roof van.

•The board unanimously approved hiring police officer Reginald Fleming as recommended by Humboldt Police Chief Reynard Buchanan. In a letter to the board, Chief Buchanan noted Fleming had met all requirements of Tennessee law to become a law officer.

The board also approved hiring Bruce Pafford to the street department. Supervisor Willie Reed made the recommendation. Reed noted that Pafford knows how to operate bulldozers, backhoes and other heavy equipment.