Nearly 35 years ago, Ellen Bundgaard’s father Klaus took the trip of a lifetime through the American Inter-Cultural Student Exchange Program.

Klaus spent his “senior” year of high school living with Frank and Sandra Gibson in Trenton and graduated from Peabody, although he had three more years of formal schooling awaiting him in Denmark.

Earlier this month, Klaus and his wife Eva brought their three children, William, Ellen and Ludvig back to Trenton for Ellen to experience a taste of what Klaus’ year in 1985 was like.

Klaus described his time as Trenton as really special. 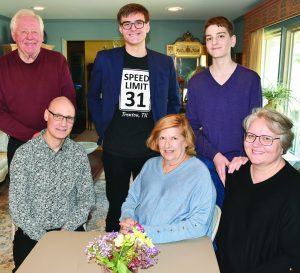 RECONNECTING – Klaus Bundgaard, a former exchange student, returned to Trenton last week to spend time with his American hosts, Frank and Sandra Gibson, and allow his daughter Ellen to attend classes at Peabody High School. It’s the second time in three years that Klaus and his family has visited the Gibsons in Trenton. Pictured in the Gibson home are (front row, from left) Klaus Bundgaard, Sandra Gibson, Eva Bundgaard, (back row) Frank Gibson, Williams and Ludvig Bundgaard. Ellen is not pictured as she was in school. Photos by Crystal Burns.

“I had never been that far from home,” the Denmark native said. “Everybody was just really friendly. It was really a great year. I was kind of a shy guy. It helped that everybody wanted to talk to me. I was a one-year VIP.”

“He was an excellent student,” Sandra said.

Frank described Klaus’ daily schedule, saying the teenager would get home from school and head straight to his bedroom to study for a couple of hours.

“He wouldn’t say anything, but we figured out what he wanted about 5 o’clock,” Gibson joked. “He wanted to eat.”

After supper, Klaus would watch a bit of TV, usually no more than 20 minutes, then head back to his bedroom for more studying. He explained to his hosts that that was what was expected of Danish students.

Klaus wasn’t tied to the books though; he enjoyed socializing with American students. He laughed about hanging out in the parking lot where students met to listen to music, shoot the breeze and avoid going home. Klaus said he was probably the only teen without a driver’s license. He rode a bike around the lot instead, going from car to car to visit with friends. Klaus also participated in Boy Scouts and was the Peabody band manager.

He was popular in school, particularly in chemistry class, where for the first two weeks of the semester, his American classmates were learning the metric system.

“I was at the top of the class,” Klaus joked.

Klaus loved his time at Peabody so much, he wanted 15-year-old Ellen to experience at least a part of it. She spent last week attending classes there, shadowing her gracious tour guide Katye Marie Greer. Frank Gibson also invited Ellen to speak at the Trenton Rotary Club’s Feb. 12 meeting, where she compared Denmark and America. 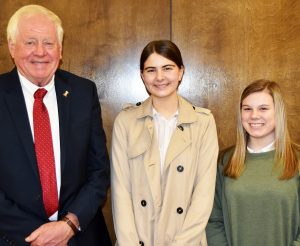 CULTURAL EXCHANGE – (from left) Frank Gibson welcomes Ellen Bundgaard and Katye Marie Greer to the Trenton Rotary Club last week. Ellen is the 15-year-old daughter of Klaus, who spent a semester attending Peabody High School and staying with Frank and Sandra Gibson in 1985. Ellen spent the week attending classes at Peabody with her Katye Marie.

In Denmark, Ellen is still in elementary school, which goes from first to 10th grade. Next for her is junior college. Public school and health care is paid for by Denmark’s high taxes, and fuel costs $8 a gallon.

Danish students learn English and German, and Ellen will have a unit of study in Japanese to prepare for an upcoming 10-day trip to Japan that’s part of a cultural exchange between her school in Denmark and a school in Tokyo.

The driving age in Denmark is 18, and driver’s licenses are expensive. In fact, to save money, Klaus got a Tennessee driver’s license when he turned 18 while living in Trenton. Once he returned to Denmark, he was able to exchange the license for a Danish one, saving him hundreds of dollars.

In 1987, Sandra Gibson traveled to Denmark, where she stayed with Klaus’ family and did a lot of traveling. Klaus and his father came to America soon thereafter and made a trip to Trenton to see the Gibsons. They kept in touch on and off in the following years until reconnecting on Facebook, where Klaus has also found many of his Peabody friends.

Klaus and Eva have been married 18 years. He is a senior software developer, and she is a customer supporter at the same company. Klaus has happily recounted his time in Trenton to his wife and children, and three years ago, the entire family made their first trip to America.

“It was fantastic,” Eva said. “We felt so welcome. Everybody is so open.”

The Bundgaard family enjoys traveling in Europe and America. Eva called their first trip to the states the best thing they ever did.

18-year-old William is particularly fond of the root beer, which he can’t get in Denmark. He also laughed about his first experience in Walmart, with Eva saying there’s no need to go to Disneyland when the family is entertained at the giant box store.

Frank and Sandra were clearly pleased to have Klaus and his family back in their home last week, sharing meals, laughs and lots of memories with their Danish friends.

“We just feel like he’s our son,” Sandra said. “I’m his American mama.”

PHS Little Theater to be renamed for Berlynne Holman

Your Right To Know