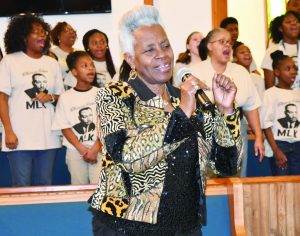 From the welcome at the Gibson County Courthouse to the benediction at First Baptist Church on Gibson Road in Trenton, Monday’s Martin Luther King Jr. Day celebration promoted hope.

At the courthouse, Maria Doaks reminded those gathered of this year’s theme, “There Is Still Hope,” and invoked one of King’s most famous quotes, “I have been to the mountaintop, and I have seen the promised land.”

Less than 24 hours after delivering the powerful speech, King was assassinated in Memphis. Tommy Hooker spoke at the church and remembered where he was on April 4, 1968, when King was gunned down while standing on the balcony of his motel room. He was in Memphis to lead a protest march in sympathy with striking garbage workers of that city. 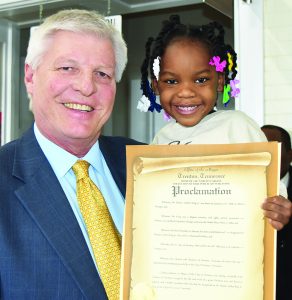 At the time, Hooker was stationed at an Air Force base in California.

“The command post got quiet,” Hooker recalled. “We couldn’t believe at that point in time what had happened.”

Hooker said King’s death was devastating for the United States and said those living with injustices are still waiting for someone to pick up King’s mantle.

Ernest Ligon, pastor of Mt. Pilgrim C.M.E. Church in Trenton, was the guest speaker at First Baptist. His sermon was called “Hated Without A Cause” and drew inspiration from John 15:8-9. Ligon said that misunderstanding leads to hatred and challenged his listeners to spending time getting to know each other.

“We’ve got to learn each other so we can love each other,” he said. “As Christians, we’re called to share the love of Christ.”

Ligon said that fear often causes people to avoid speaking out against injustice, but he reminded them that before King stepped up, he went to God in prayer.

“What Martin Luther King did, he didn’t do on his own,” Ligon said. “He had to have God’s leadership.”

During his portion of the program, Hollis Skinner asked graduates of Trenton Rosenwald High School and their families to stand. Skinner marched with King and was jailed with him in Nashville in 1960. Skinner was just 19 at the time. He left Trenton after graduating from Rosenwald.

“I’m an advocate of schools,” he said.

He asked the crowd to write the governor, state representatives and senators and local leaders to ask them to save the old Rosenwald School in Trenton. Currently, Tennessee State University owns the facility and is set to tear most of the building down, save for the area it uses for its Head Start portion. The TSU Foundation renovated the Head Start area.

Skinner said they are tearing it down because they don’t care about the history of the school, but there could be other uses for the building.

Trenton Police Chief Bill Cusson also spoke at the church, saying the community deserves a Police Department that serves in an unbiased manner.

“The police are the public, and the public are the police,” he said. “Working side by side is key.”

The Gibson County Youth Choir led the audience in worship with several soul-stirring songs. Bro. Markeus Patterson leads the choir. He announced that the choir would perform a special concert Feb. 23 at a location to be determined.