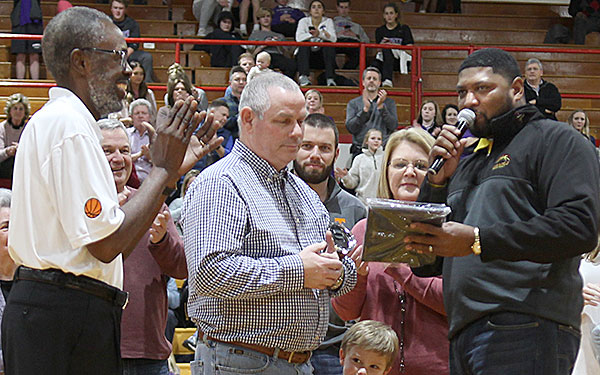 One of Humboldt biggest sports fans was recognized during Friday’s basketball games against Trinity Christian Academy. Barry DeLoach, former sport writer and photographer for the Humboldt Chronicle, was honored for his service covering Humboldt sports for over 20 years.

In between the Vikings’ and Lady Vikings’ games Friday night, DeLoach was brought out to center court with his family surrounding him. He received a standing ovation from both sides of the Thomas Ray Boykin Gymnasium.

“Barry is one of Humboldt’s finest and deserves this recognition for his dedication to Humboldt sports,” Humboldt City Schools Athletic Director George Yarbro said at half court. “We wanted to do something to show him how much we, in Humboldt, appreciate him and everything he does to support our school system.”

Head Coach Ronald Abernathy and Yarbro presented DeLoach with a plaque that stated, “This is a special thanks to you. Humboldt High School appreciates you for more than just your work as the Humboldt sports writer. Viking nation proudly honors you for your commitment and support to Humboldt City Schools.” DeLoach also received a Humboldt Viking tumbler mug.

“Barry was an asset to the Chronicle in so many ways,” editor and long time friend, Danny Wade said. “Barry and I go way back to Little League baseball days. I’m so proud Humboldt City Schools honored him for his commitment to covering Humboldt Vikings sports. He did it without prejudice, with accuracy and our readers had an image of the game, just as if they were there in person.”