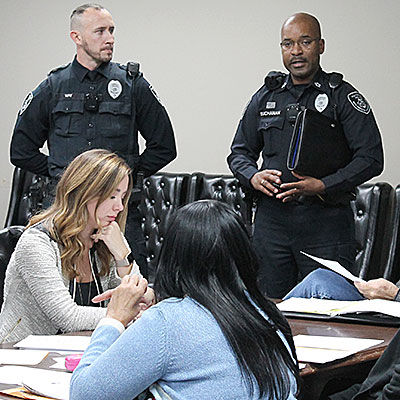 One of Humboldt’s finest has a new title. Humboldt Police Department’s Patrolman Derek Way was promoted to sergeant last week.

During last week’s Humboldt Board of Mayor and Aldermen meeting, Mayor Marvin Sikes submitted to the board a recommendation from Police Chief Reynard Buchanan to promote Way to sergeant.

Chief Buchanan addressed the board. He said with the resignation of Sgt. Randy Hickerson, it left the department short one patrol sergeant. That resignation created a situation where the B-shift lieutenant had to work seven days a week.
Buchanan touted Way for his professionalism, his commitment to Humboldt and the police department, and his leadership skills. Buchanan said Way is the right candidate for the promotion.

Some of the board members asked how Way was selected for the promotion. Chief Buchanan and Mayor Sikes explained the new procedure the board had approved for promoting within the departments.

Alderlady Donna Johnson motioned to accept Chief Buchanan’s recommendation to promote Way to the position of sergeant, where Alderman Don Graves seconded. The motion passed unanimously with a 4-0 vote. Alderman Leon McNeal was unable to attend the board meeting.

After the vote, Sgt. Way addressed the board, thanking them for having faith in him and for approving his promotion.

•Prior to Way’s promotion, the board unanimously approved the resignation of Sgt. Hickerson. Hickerson had been with the HPD for four-plus years.

In Hickerson’s resignation letter, he stated he decided to step away from law enforcement for now. After discussions with his family, Hickerson stated it was best for his family.

•The board approved a beer permit for on-site consumption to Scottie Rodgers at 3 Doerr’s Down located at 3085 East End Drive.

Chief Buchanan’s background check on Rodgers came back clean with no driving or criminal violations that would prohibit him from being eligible according to the city’s beer permit regulations.

Rodgers, who attended the board meeting, said he owned the building and his daughter was the previous holder of the beer license for the establishment. She had surrendered the permit, allowing Rodgers to apply.

•Mayor Sikes presented adjustments to the Humboldt Industrial Development Board to begin staggering terms. Every IDB member was on the same term length with six of the seven members’ terms expiring in 2022.

It was noted that new state laws require staggered terms.

These recommendations were unanimously approved.