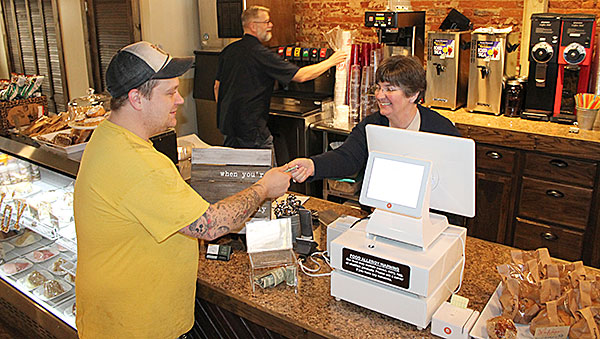 TIP IT FORWARD – Trey Lynch (left) pays for his order at The Coffee Shop as he gets his change. Lynch then dropped it in the tip box on the counter. Guy (background) and Tammy Causey (right) are using all tips for Tip It Forward and donating it to non-profits. Last week they presented checks to the Boys & Club of Humboldt, A Mother’s Choice and Birth Choice.

Everyone has heard of the phrase “pay it forward”, which is helping someone out if you have the means to do so. One Humboldt business is paying it forward but with a twist.

The Coffee Shop in Downtown Humboldt has their own version they call “Tip it Forward”. Owners Guy and Tammy Causey came up with the idea of taking all the tips and giving it back to worthwhile community organizations.

“We heard of other coffee shops that do this but most gave to projects overseas,” Mr. Causey explained. “We talked and wanted to do something similar, but wanted to do the giving locally. This was decided before The Coffee Shop opened.”

Last week, the Causeys did just that. After collecting tips since they opened in September, they presented three checks totaling $9,000 to three worthy causes that hold their same Christian values—Boys & Girls Club of Humboldt, Birth Choice of Gibson County and A Mother’s Love. Each received a check for $3,000. Every penny of the tips goes into the Tip it Forward fund to be donated.

Mrs. Causey described how each of these organizations provides similar services as related to children. Birth Choice assist moms-to-be with accurate information and the choices they have. They continue to help mothers after the birth of their child. A Mother’s Love helps moms be moms, Causey said. They offer classes, help mothers get on their feet, ready for jobs and caring for their babies. Boys & Girls Club works with elementary age kids giving them love, guidance and getting them on the right path to becoming quality citizens.

“We chose these three because they reflect the values that were instilled in us,” Mrs. Causey noted. “Life is important. Lives matter.”

When The Coffee Shop opened and was hiring the staff, the Causeys let them know of how the tips would be donated to non-profits. Because none of the staff receives tips, they are paid a higher wage than traditional servers make where tips are the major portions of their pay.

The Causeys took Tip it Forward another step further. Since all the donation funds are given by their patrons (who they refer to as guests), the Causeys asked the customers where they would like to see their tips go.

“Because it’s given by the community, it’s their money,” Mr. Causey said of the tips. “We asked, ‘what would our customers support’. That’s why we didn’t go with water projects or literacy programs in Africa and over seas. Not that those aren’t worthy, we want the community’s money to benefit our area.”

When The Coffee Shop was in the planning stages, the consultant asked which customer base they want to target. Mrs. Causey said they didn’t have a target customer base, “Whoever God brings to our door.”

Now they have a wide range of customers from high school students to senior citizens. And the word has quickly spread, regularly drawing people from surrounding counties.

“The Coffee Shop is not a Hallmark type job—it’s hard work,” Mr. Causey said. “But The Coffee Shop on Main Street is helping downtown be a Hallmark location. With all the events, Fall Fest, Christmas on Main, shopping, there’s excitement in downtown. New shops are popping up. We’re thrilled to be a part of that.” 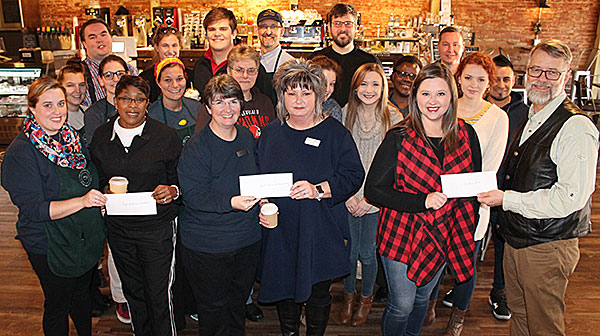 COFFEE SHOP DONATES – The Coffee Shop owners, Guy and Tammy Causey, present the first round of checks to local non-profits from proceeds of their Tip It Forward program. All tips collected at the downtown shop are pooled and then donated to worthy causes that hold the same values as the Causeys. Coffee Shop’s McKenzie Lynn (front row from left) presents a check to Boys & Girls Club’s Gladys Robinson, Tammy Causey presents a check to Kelly Walls with Birth Choice of Gibson County, and A Mother’s Love’s Rachel Hill accepts a check from Guy Causey. They are joined by a host of guests and staff members.