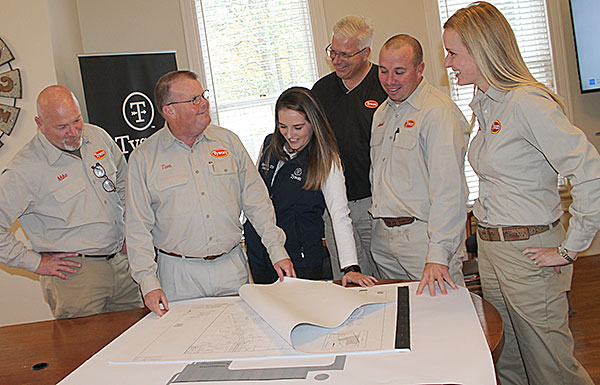 It was exactly one year ago when the biggest news in many years hit Humboldt and Gibson County. Tyson Foods announced plans to build a new chicken processing plant in the Gibson County Industrial Park.

“This is a historic day for Humboldt and Gibson County,” Humboldt Mayor Marvin Sikes said during the announcement last year.  “Tyson Foods’ tremendous capital investment and job creation will have a long lasting, positive impact in our community for years to come. I could not be more excited.”

That announcement of 1,500 jobs coming to Gibson County has since sparked a year’s worth of excitement. Already new businesses are popping up and the housing market is booming.

A month before the announcement, Tom McCue was offered the top position in Humboldt as the complex manager. For those who have had the pleasure to meet McCue, he fits right in as a Gibson Countian. McCue has Tennessee roots, working at the Tyson Shelbyville plant for over 12 years and has been with the Tyson company for 25 years.

McCue began working on hiring his staff. Week by week, new positions were added. They opened their headquarters in a historic house on Main Street in Humboldt.

“Strawberry Festival week was an eye-opener for me,” McCue said of small-town living at its best. “We were right here in the middle of it. The people have really welcomed me to Humboldt and Gibson County.”

Tyson HR manager, Vanessa Pressen, described the house as a charming old farmhouse that is warm, welcoming and cozy. We want that culture—welcoming.”

As complex manager, McCue will oversee operations at the processing plant at the Gibson County Industrial Park, the hatchery located in Humboldt Industrial Park and the feed mill to be located at the Fruitland granary.

The road to land such a huge operation took years and years of work and planning. The property was purchased by the county. City, state and county officials worked extremely hard to get the industrial park on the state’s “Site Ready” list, meaning it was ready for industry to move dirt and build. The park had been on the short list of several potential industries but never got the final call. That was until Tyson came calling.

Many people, including chamber executives, mayors and business people played roles in landing Tyson. Perhaps none were bigger than Gibson County Director of Economic Development Kingsley Brock, who had worked for the state ECD department.

“It has been a busy and exciting year since the Tyson announcement last November,” Brock said last week. “The beginning of the Tyson project for Humboldt and Gibson County actually started in early May of 2017 when Mandy White with the Jackson Chamber called me. She had just started working a huge food related project and was asked by the consultant to reach out to other West Tennessee communities, which might have a site big enough to accommodate the 100 acre plus site requirements. Mandy and I worked together during my time with the Jackson Regional Partnership so she was familiar with our county park site. I put a site package together and Mandy sent it to the consultant along with sites from Jackson and a couple of other West Tennessee communities. In late May, the consultant contacted me directly and on June 14th Tyson officials made their first visit to the county park. The Tyson folks really liked our site and over the summer we sent site, utility, farming, demographic and other information for Tyson to review and consider. We remained on the short list until we finally won the project in October.”

In the first year, there have been a couple of setbacks that have shoved the opening date back several months. But that didn’t stop McCue and his staff from moving forward.

“We had a local grain service meeting and talked about the need for corn at the feed mill. About 100 people showed up,” McCue recalled. “In December I reached out to grower producers, people interested in growing chickens. We expected 100 people but had over 245 at three meetings.”

Next McCue worked with local realtor, Winfred Allen, to find property for chicken houses to raise the birds. Tyson has very specific guidelines including setbacks from the road, plus the property must have access to roads that can accommodate semi-truck traffic.

McCue said they have about 75-percent of the growers needed to supply the Humboldt plant and the other 25-percent are looking for land.

During the next two to three years, 386 poultry barns will be popping up within a 35-mile radius of Humboldt. There will be 336 broiler houses that grow the chickens to be processed. Broiler houses will be 54 x 600 ft. and 32,400 sq.ft. each. Another 39 breeder houses, 42 x 500 ft. are where chickens will lay eggs. Then there will be pullet houses to raise the breeder chickens.

Now, projections are to open the processing plant in December 2020. At that time, McCue says whole, prepared chickens will be brought in at first, as the employees are trained to run the equipment. By early 2021, live chickens will make their way to the plant for processing.

McCue and Presson have been diligent in talking with local high schools, colleges and TCATs about job and career opportunities, and the skills needed.

“Now is the time for someone looking for a career to get their training and certification,” Presson noted. “The big part of hiring is having the right skills, such as industrial maintenance, robotics, Ag science. People can work on completing these courses. There will be careers waiting for them.”

Another opportunity for employment is driving trucks. Tyson will have their own truck drivers that will move eggs, chicks and chickens. Other truck drivers will haul the finished tray packs of fresh chicken to grocery stores and other locations.

Once fully operational, the processing plant will run 24 hours, five days a week. The first two shifts will process the chickens. Then the maintenance and sanitation crews come in for the third shift. Presson said they take apart and clean every piece of equipment each night. At full capacity, the Gibson County plant is projected to process 1,600,000 birds per week. That equates to about a half million pounds of raw chicken meat, cut into pieces, whole chickens and chicken quarters, and packaged for sale.

“The Tyson team has just been amazing in every aspect and I could not be more excited about the future of Humboldt and Gibson County,” said Brock.

“We’re a poultry company, but we’re a people business,” McCue said. “We want people to have a long and rewarding career with Tyson. We want people to enjoy coming to work. They are valued team members. We’re going to be here for a long time—not short term.” 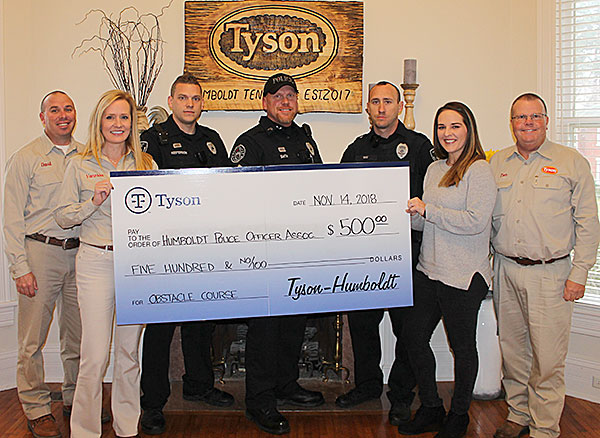 TYSON DONATES – Last Wednesday, representatives of Tyson Foods Humboldt presented a check for $500 to members of the Humboldt Police Officers Association. These funds will be used to aid in the additions the association is making to the HPOA training course site. “We are proud to support Humboldt’s men and women in blue in their efforts to remain fit and ready for the day-to-day demands of their jobs,” said Complex Manager Tom McCue. Tyson employees and HPOA members attending the check presentation are (from left) David Corvin, Vanessa Presson, Devin Kesterson, Heath Smith, Derek Way, Megan Reece and Tom McCue.