EXAMINING 3D PRINTINGS – Humboldt School Board members Wayne McLemore (left) and Valeria Smith-Wedley (center) check out a couple of projects made with the 3D printer in the computer technology class at the high school. One of the objects is a screw and the other is a miniature lighthouse. Board member Leon McNeal is amazed by the computer technology students have at their fingertips in class.

The Humboldt School Board met last Thursday evening in a calm, collective manner. As opposed to the board’s October meeting, this meeting had no fireworks, no one resigned from the board and no one walked out of the meeting.

As the meeting began, board member Leon McNeal motioned to amend the agenda with two additional items—to accept Terry Gray’s resignation and to approve an eighth grade overnight field trip to Washington D.C. Valeria Smith-Wedley seconded the motion to amend the agenda, which was unanimously approved with a 4-0 vote, as was the agenda approval.

Last Thursday night, the board unanimously accepted Gray’s resignation. It will now be up to the city board to appoint another interim school board member.

The board approved a field trip for eighth graders to Washington D.C. Humboldt teacher and coach, Harold Miller, is sponsoring the trip, which will take place May 30 through June 3, after the school year has ended.

Wayne McLemore asked if arrangements had been set or are they tentative.

Dr. Versie Hamlett, director of schools, said they are tentative since the board had not approved the trip. Dr. Hamlett noted the trip includes touring the Martin Luther King Memorial, Lincoln Memorial and the Capitol building.

Smith-Wedley asked if the trip was open for all eighth graders and if there would be stipulations on students’ conduct or grades.
Dr. Hamlett said the trip is open to all students with good conduct, which is typical for all field trips. She said academics had not been discussed.

Smith-Wedley voiced her concern about having academics as a qualifier for students. She said some students may not test well and did not want academics holding any students back for such a historical and educational trip.

Smith-Wedley was also concerned about chaperones for the trip. Dr. Hamlett assured there would be chaperones and the number would be determined by the amount of students that sign up.

During Dr. Hamlett’s superintendent’s report toward the end of the meeting, she had computer coding and technology teacher, Adrian Ingram, do a demonstration on things students were learning in the class. Ingram had two students, R.J. Abernathy and Kelcey Collins, assist in the demonstration. 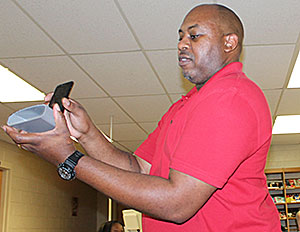 CELLPHONE AMPLIFIER – Adrian Ingram, computer coding and technology teacher at Humboldt Jr./Sr. High School, demonstrates how the cellphone amplifier can make the sound from the phone louder. The cellphone amplifier is one of the objects created by students in the computer classes using a 3D printer. Ingram gave a brief explanation during the school board meeting Thursday evening.

Ingram told the board and audience members the students are working with a 3D printer. He displayed a spool of fiber used to print the 3D objects. Ingram demonstrated one of the pieces created by the printer—a cellphone amplifier. The amplifier worked similar to a megaphone with the phone fitting into a slot and the speakers projecting from the megaphone. The amplifier worked, making the music playing on the phone a good bit louder.

At the end of the meeting, Rev. Mark Hodge addressed the board during the citizens concerns portion of the meeting. Hodge said he is a pastor and a parent of students in the school system.

Hodge has concerns about volatility in the high school, namely bullying. He even talked about threats being made by students. Hodge was not condemning the school system for the acts of some unruly students but instead wanting to know what he could do to help within the schools.

Rev. Hodge conveyed his assessment as “the streets taking over the school” and said schools were better when there was a paddle in the desk. He said schools are handcuffed from their ability to discipline. He supports a hands-on approach for faculty without being afraid of lawsuits.
Hodge said he was at the school board meeting to share a pastor’s heart and a parent’s heart.

Dr. Hamlett said she would like to speak with Rev. Hodge.

The board voted to forego the scheduled December school board meeting since there was no pending urgent business. The next board meeting will be January 10, 2019.