The Gibson County Marching Pioneers added to their trophy case, capturing their second Division I state title in as many seasons Saturday night at Riverdale High School in Murfreesboro.

The band was also named the overall state champion band and state champion percussion for the fifth consecutive year. The drum majors placed third, and the color guard finished second. The Pioneers also received the High Music Award and the Governor’s Award.

“I am extremely proud of the Marching Pioneers and what they’ve accomplished this season,” Tate said. “Through rain, heat, cold, and more rain they’ve been a resilient group of kids. Thanks to all the chaperones, pit crew members, assistant directors, staff members, parents, administrators, GCHS faculty, community supporters, and most importantly for the students for making this show and season one of the most memorable yet! ”

With a great performance in the preliminary competition, the Marching Pioneers earned a spot in the Top 10, which qualified them for the finals. In prelims, the band was awarded second in Drum Majors, Percussion and Color Guard and first in Band, rating a 1 in all four categories and receiving the High Music Award.

Finals began at 7 p.m., and Marching Pioneers took the field at 7:30 with cheers from the huge crowd of supporters there to see the final performance of  “Unseen.”

The show transports each person through times of loss, sorrow, acceptance, hope and peace, beginning with softly sung lyrics of “Angels in the Architecture” composed by Frank Ticheli. The show then transitions into Hans Zimmers’ “160 BPM.” This piece was dramatic with its strong dynamic changes as well as “rash and syncopated percussion sections.” “In The Arms of an Angel,” made famous by Sarah McLachlan, was the featured ballad of the 2018 production. The tune begins with flute soloist Alyssa Welch, baritone soloist Thomas Lawrence, bass clarinet soloist Autumn Lock and clarinet ensemble Molly Greer, Allyson Lay, Jessica Griffin, Rebecca Welch and Marlene Perez playing the melody. The performance ends with “Fly to Paradise” by Eric Whitacre.

The band was escorted back to Gibson County High School by the Sheriff’s Department Sunday afternoon where family, friends, students and faculty members greeted and congratulated them on their championship marching season.

The Marching Pioneers were also named the Tennessee Music Awards Band of the Year for 2018. 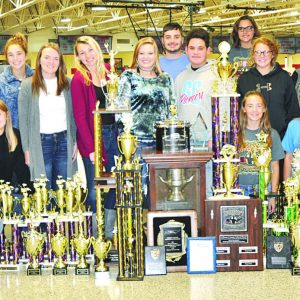