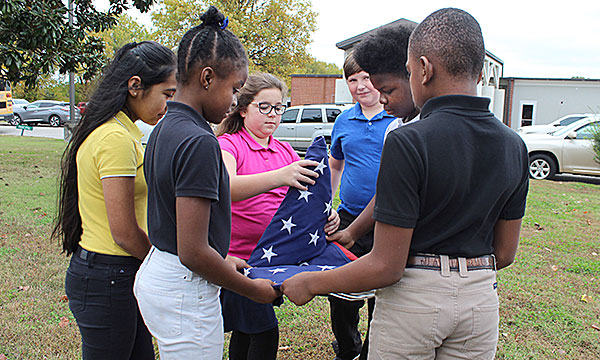 FOLDING THE FLAG – Members of the Flag Patrol at East Elementary School work together to respectfully fold the United States flag. They are (from left) Valerye Hernandez, Malysia Turner, Adelenna Gabarra, Adrian King, Martavious Rodgers and Jamarius Bufford. Lt. Curtis Baxter of the Humboldt Police Department has been working with the students, teaching the proper flag etiquette.

When people drive down the city streets, it doesn’t take long to see a business, home or some other building flying an American flag. Often times, these flags are either not being displayed improperly or no flag is on the pole.

This prompted Lt. Curtis Baxter of the Humboldt Police Department to get involved and help make Old Glory wave with pride the proper way. He decided to work with students at East Elementary School and reinvigorate their Flag Patrol program.

“As a Boy Scout and Air Force veteran, it touched a chord,” Lt. Baxter said of flags being improperly displayed. “Maybe people don’t know the right way or proper protocol. That’s why I wanted to re-implement Flag Patrol.”

Baxter contacted principal, Brittanie Doaks, about working with students and bring Flag Patrol back. He said she was all in and thought it was a wonderful idea. Librarian Audrey Jones and school secretary Pyper Marsh were on board as well.

“I’ve had nothing but cooperation from the school personnel, from librarian, front office, the principal,” Baxter noted. “When I pitched it, they took it and ran with it.” 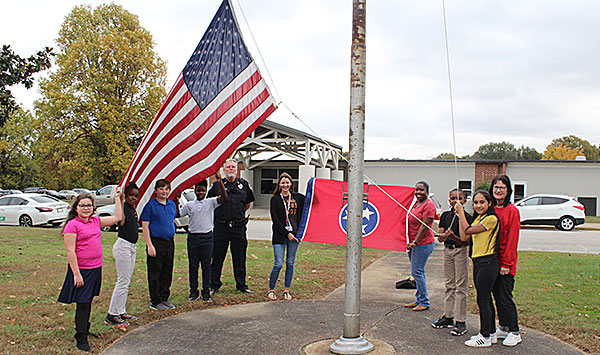 “This year’s kids are doing an excellent job,” Baxter said. “We practiced two or three times to get it down. They are very dignified carrying the flag.”

“We talked about the various parts of the flag and how to display it properly,” Baxter noted. “The rope attachment is called the hoist. The stars are the field, one star for each state. There are 13 stripes for the original 13 colonies (of the United States). The white represents purity and the red for the blood shed.”

Baxter taught the students how to properly display the flag at half-mast during times of mourning. The flag should be raised all the way to the top of the pole, then lowered to the middle at half-mast. He also taught them how to fold the flag to be put away. The flag is folded over twice, lengthwise, then folded into a triangular shape.

With the Flag Patrol program going so well at East Elementary, Baxter would like to get a program going at Stigall Primary School but first graders are too young and small to be able to raise and lower a flag. Because of this, Baxter is working with the local Boy Scout troop to raise a flag in front of the school building where it will remain flying with a light mounted to the base, shining upward onto the flag. Baxter said this is the proper way to have a flag continuously flying, lighted from below.

Being a Boy Scout and military veteran, Baxter is passionate about the flag and what it stands for.

“The flag is a symbol of our country,” Baxter stated. “Symbols are very powerful things. They predate the written word and literacy. When an individual looks at the symbol, it speaks to you. It means different things to different people. It’s very personal.”