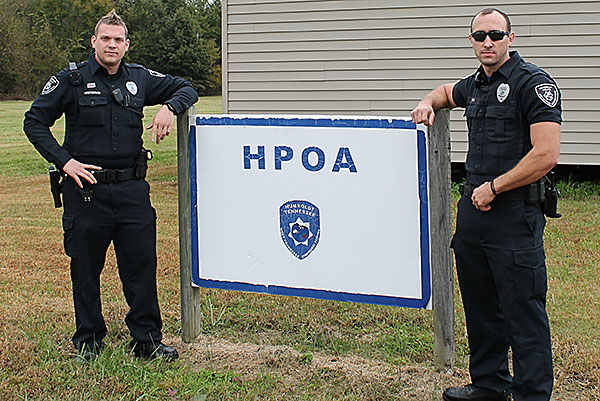 TRAINING COURSE SITE – Humboldt Police Officers Association members Devin Kesterson (left) and Derek Way plan to build an obstacle training course at the HPOA property on Bledsoe Rd. in Humboldt. When the course is completed next spring, it will encompass over half of the property and include 25 obstacles and multiple sprints along the course.

A group of highly trained individuals are putting their best foot forward to create even better training. Members of the Humboldt Police Officers Association (HPOA) plan to build an obstacle training course at their property on Bledsoe Rd. in Humboldt.

Humboldt police officers, Devin Kesterson and Derek Way are spearheading the training course. The course will utilize over half of the property.

The course is planned to include 25 distinct obstacles, covering over 500 yards and have three designed degrees of difficulty.

Way said the course will be bigger, longer and more difficult than the one used at the Police Academy. Anyone who can complete this course should be able to pass the academy’s course.

Kesterson and Way hope to begin work on the course next week with a target date for completion sometime next spring.
Way and Kesterson, along with Dan Ables, discussed the features of the planned course. Much of the course involves sprints.

The five-yard tire drill simulates running through high grass and weeds, or other small obstacles on the ground.

The low crawl simulates covering or concealing yourself.

There will be three walls to climb, five feet, eight feet and a taller wall yet to be determined. This training simulates crossing fences or other barriers in the field, while testing ones agility and mobility during a pursuit.

The hill climb will test coordination, balance, strength and speed.

A 15-foot balance beam will zigzag to change direction.

There will be a five-foot broad jump test simulating crossing ditches or culverts. Officers will know whether to broad jump or get a running start in over to get to the other side.

A 10-yard barrel run tests the ability to quickly change direction while in pursuit.

A 10-yard dummy drag simulated carrying a person out of danger or getting a suspect into the back seat of the patrol vehicle.

The tire flip uses a large tractor tire weighing over 150 lbs. flipping this monster tire take lower body strength to get the tire off the ground as well as upper body to push it over.

Different destinations throughout the course will include sprints of various lengths—some long, some short and some in between.

Perhaps the best feature of the course, the critical thinking station, doesn’t take muscles—it takes brainpower and coordination. This station tests mental strength using complex motor movements such as disassembling and reassembling a firearm, memory test using photographs to determine how many key features can be remembered after viewing the photo for a few seconds.

Ables referred to this physical fitness and mental health combination as a lost field of defensive tactic, or what he called de-escalation. Police officers can learn about themselves as well as their co-workers as to how each reacts when exhausted or under duress. He said de-escalation is for the officer to calm down and for the officers to get the citizens to calm down while responding to issues.

Officers have to remain at that level of control at all levels of conflict, Ables said.  Much of that comes with experience, having control over actions and reactions.

What does this mean for the average Humboldt citizen? It means Humboldt’s finest are ready—physically and mentally. The extra training makes them better prepared to handle whatever crisis or circumstance comes their way, to handle it promptly, professionally and as tactically as possible. The goal is to provide the best response for the community and improve the level of response.

Recently the association constructed a special response training building on the property. The building is used to simulate police officers entering homes or businesses where crimes are taking place. The training could be for rescue and extrication of a victim, or could be to apprehend a perpetrator.

This new obstacle training course will be another tool for policemen to utilize as they hone their skills.

The Humboldt Police Department and the Humboldt Police Officers Association are two separate entities even though they work and exist hand-in-hand. No city tax dollars are used by the association. They are self-funded through the memberships and donations.

Over the past few years, the HPOA hasn’t been as active as before. Now, there is more involvement and activity on site. This new course should make Humboldt’s police force better trained and prepared to protect and serve.