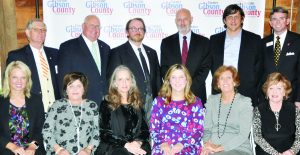 The annual Greater Gibson County Area Chamber of Commerce membership appreciation banquet started with a bang and only got better.

Before handing out awards for Educator, Young Professional, Person and Business of the Year, Chamber Executive Director Libby Wickersham turned the program over to Tom McCue and Vanessa Presson of Tyson Foods in Humboldt. The duo announced the company had selected six recipients for $500,000 in grant money to address community needs across the county (see related story).

“We look forward to the partnership we will have with Tyson for many years to come as Gibson Co. helps feed the world,” Wickershm said. “This project, like so many others, has been in the making for years and years, and we are thankful for the vision so that we can reap the benefits at this time.” 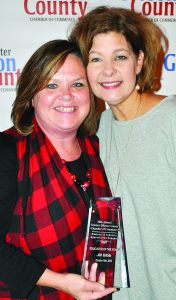 Jill Bibb, an English teacher at Peabody High School, won the first award of the evening, taking home Educator of the Year.

“If you observe her for only a short period, you will see that she definitely has a special calling to teach,” Peabody principal Rickey Hooker said. “She not only teaches the curriculum, she teaches life lessons to include respect for one another, to always strive for excellence whether in the classroom or outside of school, and to remember that the storms of life often end with a rainbow and the chance for growth. She inspires us all.”

Bibb is a member of the Trenton Special School District’s Teacher Leader Program and founded Peabody Serves, a student organization that offers services to the community.

Other nominees were Carla Copous of Bradford and Denice Walton of South Gibson Co. High School.

Josh and Christina Youmans were honored as Young Professionals of the Year.

“[This couple] believes that small communities are the backbone of our nation, and we can improve our nation one community at a time,” said last year’s Young Professional of the Year Heather Martin. “In talking with folks about [them], there was one common thread – always willing to help.”

The Youmans bought Medina Florist in downtown and later purchased and renovated a downtown building now known as Main Street Grill. They also own Quality Framing, are active in area youth activities and founded A Lending Hand in 2015, an annual event that raises funds and collects gifts to be given to families in need. In 2016, they organized the Downtown Medina Street Festival that has boosted downtown merchants.

After being named Person of the Year, Dr. Phil Fortner, who will retire at the end of December, is going out on a high note.

“[Dr. Fortner] wants the community and its citizens to succeed and be the very best they can be but wants no thanks or accolades in any role he may have played in that success,” said Bradley Owens, who presented the award with his wife Alicia. “In fact, he would rather his name or his business not be mentioned.” 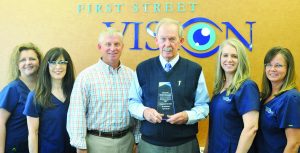 Dr. Phil Fortner celebrates his award as Person of the Year with his friends at First Street Vision in Trenton.

For 51 years, Fortner has been in business at the optometry practice his father started in 1939 in Trenton. The name has changed through the years and is now First Street Vision, but Owens said the most important business practices have remained the same – to treat all patients with kindness and respect.

Other business owners are also riding off into the sunset with their peers’ highest praise. City Lumber Company in Dyer was named the Business of the Year with longtime owners Scott and Patti Wright sharing the honor with new owners Jason and Andrea McDaniel. Chris Parham presented the award, saying it was an honor to recognize his mentors and friends.

“This company’s reputation in the business world is unparalleled,” Parham said.

City Lumber Co. dates back to 1884. The Wrights have grown their family-owned business to 10 fulltime employees with combined experience of 120 years. In 2007, City Lumber Co. became a dealer for W.R. Case knives and quickly rose to Exclusive Master Dealer status, one of only 10 nationally.

In 2017, the McDaniels bought into the business and will become full owners in January. 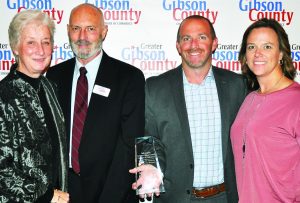 “They plan to carry on the beliefs, traditions and values that have been established by the Wright family that made this business an icon in Gibson Co.,” Parham said. 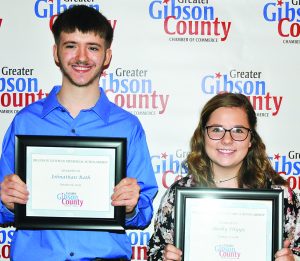 “The work we do in economic development, tourism, retail recruitment, workforce development and all the other buckets we try to fill on a yearly basis is only possible because of the support that you give us year after year,” she said.

Tony Burriss provided music, entertaining guests with an acoustic set that covered The Beatles, Jimmy Buffett and Jackson Browne. Harry Montgomery Jr., a Trenton native and retired brigadier general of the Tennessee National Guard, was the guest speaker. Montgomery kept the crowd laughing with stories from his school days, admitting that he was not a good student.

“I was too young to appreciate I was being taught by some of the most knowledgeable and smartest women in what Tom Brokow would name ‘The Greatest Generation,’” Montgomery said.

After serving four years in the Navy, Montgomery would go on to rise in the ranks of the Tennessee National Guard. He also received a bachelor’s degree from the University of Tennessee, proof, he said, that some of what his Trenton teachers tried to teach him stuck. Montgomery retired in 2015 after a distinguished 40-year military career and now volunteers at the VA Medical Center in Memphis. 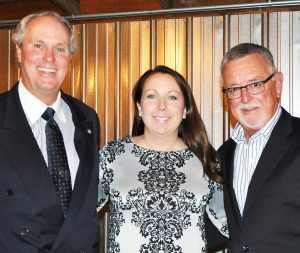