Michael and Lacey Gregory are nine year residents of Humboldt, but they were both raised in Yorkville.

Michael had a heart transplant when he was 10 years old in 1994 as a patient at LeBonheur Children’s Hospital in Memphis. Michael knew that as a transplant patient, he would eventually have to have another heart due to complications that typically arise from receiving a heart. Michael has a coronary artery disease called vasculopathy.

Michael is 24 years out from his first transplant. He is still working as a LPN at Jackson General, but he has starting to feel more tired in recent months. He has been working there the last eight years.

The doctors were starting to see some decrease in his cardiac functions. He has known that he would have to be re-transplanted in the last year.

As a child of 10, he only had to wait three months for his donor heart. He thinks now the wait could be as much as two years. He is ready whenever they call him, but as he puts it, it’s all in the good Lord’s hands now.

The family is being given a benefit Oct. 27 at 5 p.m. at the Yorkville Community Center. It is sponsored in part by their church, Bethel Baptist of Yorkville, and is being spearheaded by Regina Gregory.

The couple is very fond of their church, hence the long drive from Humboldt to Yorkville for Sunday services. Michael said, “We have a great church family. They have been very supportive through all this.”

There will be a meal and singing at the benefit. There will be an auction for several items that have been donated. They will also give away a Thompson/Center Compass bolt action .243 Winchester towards the end of the night.

Michael used to work for Joey Hays at Food Rite in Dyer, and he has a lot of support in Dyer and Yorkville. 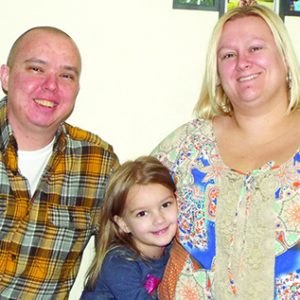