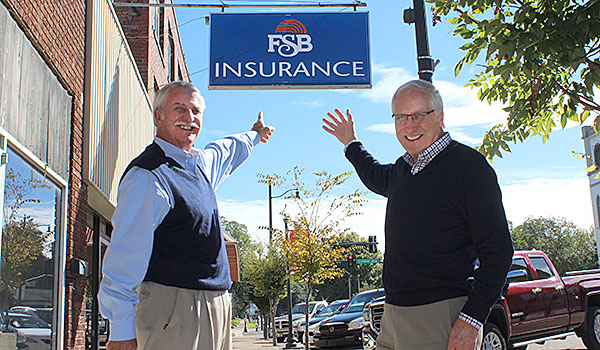 Two insurance agencies that have been staples in the Humboldt business scene for decades have joined forces. FSB Insurance and Dowsley Insurance are now under the same roof in downtown Humboldt on Main Street.

John Hale and Cole Dowsley combined have almost 90 years of experience in the insurance field. Last month, Dowsley sold the family business to FSB Insurance and will stay on, along side Hale. The Dowsley Insurance office on Main Street is now a part of the FSB family.
For Dowsley, the sale is a good move for he and his family, and his customers. It will free up more time for him with customers with the added bonus of being able to offer a better variety of insurance coverages.

“Dowsley Insurance had good insurance coverage, but on certain types available we didn’t have a lot to choose from,” Dowsley said. “Now we have more resources. It’s Main Street hometown service with the resources of a large regional agency.”

FSB Insurance is division of the Sunstar Insurance Group with headquarters in Memphis, according to Hale. Hale has been with the company for over a year now after FSB purchased the insurance business from Simmons Bank.

Hale got started in the insurance business in the mid 1970s working at Kimbrough Dunlap Insurance Agency, right next door to Dowsley Insurance. In 1976, Hale partnered with Sonny Herndon to open their own company, Hale and Herndon Agency, which later became CCI. Over the years, Hale said their agency moved to a few different locations, but all were in downtown Humboldt.

In 2007, CCI sold to First State Bank where Hale stayed on as executive vice president. Later First State was sold to Simmons Bank. Soon after, Simmons got out of the insurance business and sold to Sunstar under the FSB name.

For Dowsley, he has worked in the same family company his entire career. His father, Felix Dowsley, opened the agency on Main Street while Cole was a youngster. After college, Dowsley joined his dad’s firm and has been there ever since.

Hale’s father was also a businessman on Main Street. Hale and Albright Men’s Store was located just a couple of doors down from Dowsley Insurance. Hale and Dowsley knew each other growing up with the fathers’ businesses on Main.

“It’s a big deal to sell your business,” Hale said. “I did it and I’m glad I did. I put it in God’s hands knowing he has a plan. It worked out for the best.”

“It’s time to transition,” Dowsley said of the timing of selling the family business. “I already enjoy not having to manage the day-to-day operations. All my customers are good with it (the sell/purchase).”

“Now he has the freedom to get out and work his business,” Hale said of Dowsley’s new situation. “It makes a difference. We can serve our customers even better.”

With both men vying for insurance customers and even competing for the same customer base, they’ve always had the upmost respect for each other.

“I’ve always had the highest respect for Cole,” Hale noted. “I can’t think of a time we butted heads.”

Dowsley agreed and is proud to work along side Hale as a team.

As hard as it was to sell the family business, Dowsley knew the timing was right. It wasn’t like he was out trying to sell the agency but instead, FSB came knocking at his door.

“Now, I get to continue to do what I love to do, which is serving the insurance needs of my customers but with more companies and resources for my customers,” Dowsley said of the bittersweet transaction. “That’s good.”

One of the biggest factors in selling was the ability to offer customers more choices, which in turn offered better insurance coverage with better rates. There were times when a customer might come in to get insurance coverage but the choices Dowsley Insurance had were sometimes limited. Now as a part of Sunstar, there are many more companies to work through, offering many insurance options.

Sunstar is nearing the top 50 insurance companies in the United States and could reach that mark soon, Hale and Dowsley said. Even though it is a large corporation, it is still regional and local.

Sunstar has offices in Humboldt, Milan, Jackson, McKenzie and Murfreesboro. They operate in four states, Tennessee, Arkansas, Missouri and Kansas.

“You’ve got two old horses going down the home stretch,” Dowsley compared his and Hale’s insurance careers. “Neither of us is ready to retire or put out to pasture.”