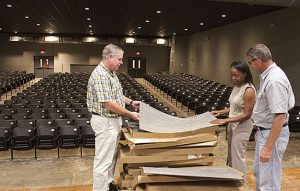 NEAR COMPLETION – Lashlee-Rich’s Greer Lashlee (left) and Bryan Parkhill (left) show Dr. Versie Hamlett the carpet tiles that will be installed in the old Jr. high auditorium. The auditorium has gone through a massive renovation and should be ready to use in a few days.

After almost a year, auditorium renovations at the old Humboldt Jr. High School of Ferrell St. are just days away from being complete. The completely renovated auditorium will be ready to use once the finishing touches are completed.

Renovating the auditorium is part of a $4.5 million project by Humboldt City Schools. Over $3 million of the overall project went into renovating Stigall Primary School. Other renovations were done at Humboldt Jr./Sr. High School. An estimated $1 million was reserved to renovate the auditorium and band room attached to the rear of the auditorium.

“Demo began last November,” said Lashlee-Rich’s Bryan Parkhill, superintendent on the project. “All the chairs were removed, all the carpet was pulled up in the band room, the HVAC openings were cut out and we had to remove the asbestos floor tiles.”

The former technology offices that were housed in the metal building beside the auditorium were also demolished. The ceiling in the auditorium had to be removed to make way for a sprinkler system.

“At the March 10, 2016 school board meeting, approval was passed for a renovation budget of $4,575,000 for a complete renovation of Stigall Primary School, Jr.&Sr. High School gym air-conditioning and restrooms update, and renovations to the football stadium, restrooms, concession stand and locker room,” Dr. Hamlett stated. “In addition, renovation of the Jr. high campus to relocate the Central Office building and update the auditorium was included in the full renovation budget.”

After work at Stigall and the high school were completed, crews hit the ground running on remodeling the auditorium. During the renovations, as with all demolition projects, the place looked like a war zone. It was during this time when some of the school board members visited the auditorium and were shocked at its condition, thinking the place could never be salvaged.

But now, anyone who walks in and sees the finished project will be amazed at how good it looks.

“All new utilities had to be put in,” Parkhill said, going over all of the elements of the renovation last week. “Extra electrical panels were installed, new water lines, new gas lines and new sewer lines. Four restrooms were totally refurbished, two downstairs and two upstairs. Plus a new restroom was built in the dressing room, which was the old band room.”

Five new HVAC units were installed. The auditorium had never been air-conditioned until now. Two large 25-ton units supply the auditorium, while three other smaller units are used for the restrooms, foyer and dressing room.

Outside the auditorium, the windows were insulated and covered with metal panels and new sidewalks have been installed.

Inside, all new seating was installed with 546 seats plus six handicap spaces. The concrete floor was sanded and polished, and new carpet tiles will be installed in the isles. A fresh coat of gray paint, new black tile ceiling and LED can lights really make the old auditorium pop. A custom sound booth was built at the rear of the auditorium.

In the foyer, new luxury vinyl tiles have been laid that look like natural stone tiles. The restrooms have new ceramic tile floors, all new fixtures and new partitions.

Nine pairs of exterior doors have been installed (18 double doors) along with new interior doors and security doors to close off the remainder of the original school building from the foyer.

With almost all the work complete, last Thursday Parkhill said the biggest job left to do was sand and refinish the stage floor. Other little odds and ends to complete are trim work in the auditorium and clean up from all the construction dust and debris. This will complete the approved work.

“At the March 15, 2018 school board meeting, the board voted on Option 1 to complete the base bid – Phase 1,” Dr. Hamlett explained. “This option completed basic auditorium renovation.”

Once this phase is completed in a few weeks, the auditorium will be ready for use.

As good as the auditorium will look once completed in a couple of weeks, it could be even better. Budget restraints pulled some items on the wish list off the table such as stage lighting and ceiling, PA system with audio/video capabilities, curtains and acoustics.

With pictures showing off the auditorium hitting social media, many people suggested raising funds to complete the auditorium. With some upgrades and additional equipment, the revived auditorium could once again be a crown jewel for Humboldt.