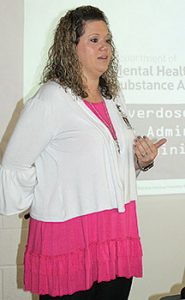 Everywhere you turn these days, you hear, read and see that this country is experiencing an opioid epidemic that is having disastrous results in the lives of families everywhere. Government agencies are pouring money into combating the problem. First responders and business people came together last week to learn to be proactive during an opioid overdose crisis.

One such effort found in Tennessee is TN: Save A Life. TN: Save A Life is a program made possible by federal funds sent to the state level. Tennessee has initiated this project, and in our area, it is led by the Weakley County Prevention Coalition. Melesa Lassiter, an RN, is the area’s regional overdose prevention specialist. She works all of northwest Tennessee.

Last Tuesday, after the efforts of director at Humboldt Public Library, Brittney Keller, recruited 50 people that attended a presentation by Lassiter at the library. The session was an education on the opioid epidemic, not only on a national level, but specifically how it impacts Gibson County. Participants were trained to administer Naloxone or Narcan. These drugs work to reverse the effects of opioids with no potential for abuse. Often the administering of these drugs will allow time for emergency personnel to arrive and render medical aid.

It is important to note that all law enforcement in West Tenn. have Narcan.

After the training, each person received a certificate of completion from the Tennessee Department of Health as well as an opioid overdose kit with two doses of Naloxone.

In Tennessee there were 1,186 deaths related to opioids in 2016. There were an additional 20,126 nonfatal overdoses in the state during the same time period.

While measures have been taken and legislation written to change the way painkiller prescriptions are issued, the addictions are very real and efforts need to be taken to save as many lives as possible. There are now at least 50 additional persons working in or living in Humboldt who can come to the aid of someone in an opioid overdose. Because of the Good Samaritan Law, which protects these individuals from civil liability for administering Naloxone to a person believe to be experiencing an overdose, 50 people have the ability to be empowered to help.

Lassiter encouraged all participants to share with others what they learned and to let them know that she is available to teens, church groups and other organizations for the same training. “As a community we are a people of service,” she said in closing.

For more information on having Lassiter speak to your group, contact her at 731-819-7603 or melesa@martinhousing.org. 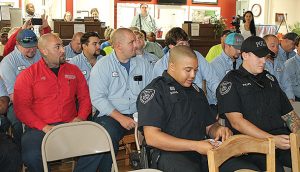 NARCON TRAINING – Last Tuesday, 50 people attended a Narcon training session at the Humboldt Public Library. Everyone in attendance received a certificate of completion as well as an opioid overdose reversal kit.