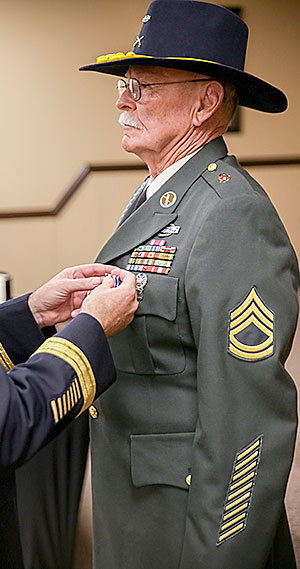 Reflecting on the Silver Star he was being awarded, Army Sergeant First Class (Retired) Wilford “Mike” Denote, a resident of Humboldt, Tenn., said his troops that day, and the servicemen and women past, present, and future were his heroes.

Denote delivered those comments to a standing-room-only crowd, August 30, at Fort Campbell, Ky. He was just presented with the Silver Star for gallantry in action, an award only surpassed in precedence by the Distinguished Service Cross and the Medal of Honor. The award was finalized May 24, 2018 in Washington D.C., just shy of 48 years from the date of the action that earned him the award, and Fort Campbell was deemed an appropriate venue for the ceremony because one of Denote’s sons is currently serving at the Army post.

Operating in the Republic of Vietnam, September 17, 1970, Sgt. Denote’s Aerorifle Platoon was conducting a ground reconnaissance mission to rescue American prisoners of war. They had been moving all day, tripping booby traps, which failed to detonate.

The point squad, led by Denote, discovered an enemy base camp complete with booby-trapped bunkers and a large cache of mortar rounds. At the same time, the platoon’s other three squads were moving to secure the planned helicopter pick-up zone. On their way to the pick-up zone, enemy forces activated an explosive device, killing three American Soldiers and seriously wounding three others. Simultaneously, a medium size enemy force attacked Denote’s squad with small arms and automatic weapons fire. Denote immediately positioned his squad between the ambushed portion of the platoon and the enemy and immediately returned fire. He moved to each of his Soldiers’ positions, giving them moral support, redistributing ammunition and grenades, and directing their fire on the most threatening of the enemy’s weapons at each stage of the fight; constantly exposing himself to enemy fire and sustaining a minor wound to his arm.

During this fight, Staff Sgt. John Hamm, the platoon’s medical section leader, who had sustained major life-threatening wounds from the mortars, crawled to Denote and began treating his wound. Shortly thereafter, Hamm was rendered unconscious from loss of blood. Denote, with total disregard for his own safety and the enemy fire that poured across the area, carried Hamm to the helicopter pick-up zone so that he could be evacuated. He then returned to his squad and continued to lead until the enemy broke contact.

Denote made light of his actions by reminding the crowd that he was just doing his duty and that he stood on the shoulders of giants, speaking fondly of his troops. But his actions that day reflected great credit upon himself, the Army, and the United States of America. 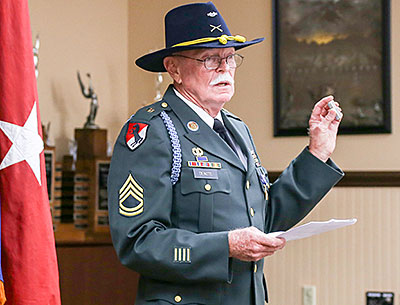 SILVER STAR – Sergeant First Class (Retired) Wilford “Mike” Denote was presented with the Silver Star for gallantry in action during his service on September 17, 1970, in the Republic of Vietnam at a ceremony held at Fort Campbell, Ky., August 30. Denote displays a Zippo lighter he carried throughout his tour of duty in the Republic of Vietnam in 1970, while serving with the 11th Armored Cavalry Regiment.