A swarm of bees halted the demolition of a crop elevator at West Front and Knox streets in Rutherford.

Steve McCartney of Bradford won the bid to tear it down. A fan belt on the track hoe broke and bees overtook workers, causing the delay.

For the last 71 years, the building has occupied time and space in Rutherford. The original part was built in 1947 and housed seeds and feed for crops. The second part of the building stored corn and soybeans. A railroad car would come off the spur.

He sold feed, seed and fertilizer. The red building across the street was his office.

In 1952, Fred Byars came to town. He was a principal in Knoxville. Byars married Lela Bell Scruggs in 1940 or 1941. She taught in Knoxville too but was from the Rutherford area. They met and married in Knoxville and came back to Rutherford.

Byars bought an interest in O’Daniel’s business. O’Daniel decided he wanted to go to Arkansas and deal in rice. He left and in later years, Byars bought out O’Daniel. Byars sold bulk fertilizer in addition to feed and seed. He also stored soybeans and corn in the tall building.

Byars lost his masonic ring in that elevator. Bobby Taylor worked there, and he started digging around in the soybeans and finally found the ring.

When Byars passed away in 1952, the business closed. O’Daniel had leased the property from the railroad.

The railroad owns it now, so the railroad authority is footing the demolition bill.

Mayor Bob White has been in monthly meeting for two years with the railroad authority in trying to get the building torn down because it had become an eyesore and a possible injury risk. Once the building is torn down and the debris hauled off, the lot will be leveled off with dirt. 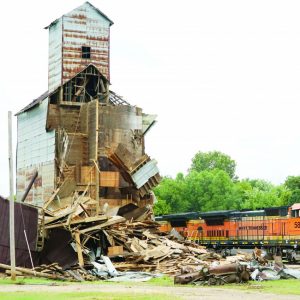