RIBBON CUTTING – St. James Baptist Church will soon begin construction on the rebuilding of their church building that was destroyed by fire eight months ago. The congregation, along with local officials and other well-wishers gathered Sunday night on the church grounds to hold a groundbreaking and ribbon cutting celebration.

by Danny Wade and Kim Forbes

August 19 marked another significant day in the rebuilding process of one of Humboldt’s oldest churches. St. James Baptist Church held a groundbreaking and ribbon cutting ceremony as the church rebuilds.

Dozens of church members were joined by community members to celebrate the occasion. Dr. James Baltimore, pastor of St. James, led the commemoration. 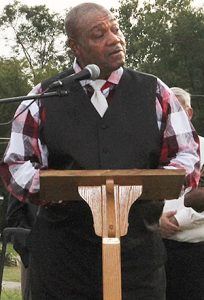 ST. JAMES PASTOR SPEAKS TO HIS FLOCK – St. James pastor, Reverend Dr. James Baltimore spoke at the ribbon cutting and groundbreaking ceremony held Sunday night on the site where the church will rebuild after the fire eight months ago. Baltimore expressed his gratitude to the mayor and all of the city teams that helped them, and members of the church expressed their agreement vocally with several “Amens” and “Praise Gods”. “We are on our way back home,” he said in closing.

“Humboldt’s a great place to live,” Dr. Baltimore said. “Everybody should want to move to Humboldt.”

St. James Baptist Church suffered major damage on Saturday, December 9, 2017. The fire was finally under control around 2 a.m. and completely out by 3:30 a.m.

But that didn’t stop the church from continuing on. Dr. Baltimore and his congregation held Sunday service less than seven hours later in the Humboldt Senior Citizens Center.

During the groundbreaking, Dr. Baltimore praised Humboldt Mayor Marvin Sikes for offering the Senior Center for the church to have their services. He recalled asking the mayor how much it would cost to use the center, where the mayor replied, nothing. 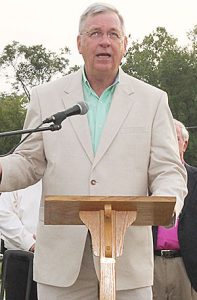 MAYOR ADDRESSES CONGREGATION – Mayor Marvin Sikes spoke of his love for the St. James family Sunday night during the groundbreaking and ribbon cutting ceremony. Mayor Sikes quoted his often-used phrase of “It’s not me. It’s we,” when addressing the congregation on how the city pulled together to support St. James during and after the fire that destroyed their house of worship. “I am proud things worked out the way it has,” said Sikes. “You are back on this historic site of 138 years and are rising from the ashes.”

“It’s not me. It’s we,” Mayor Sikes told the congregation of church and community members. “You are back on this historic site of 138 years and are rising from the ashes.”

The structure that burned in December is actually the third church building. The others were either replaced from age or out-grown.

The current building has three cornerstones, one from each building. Dr. Baltimore said the new building will add a fourth.

Last February, the church received an insurance check from FSB Insurance. Executive Vice President John Hale worked the claim for the church. This was another milestone in the rebuilding process. 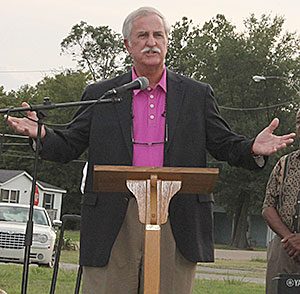 INSURANCE VP SPEAKS – FSB Insurance representative, John Hale, was also on hand to speak to the St. James congregation. Hale noted that God does provide. “He is starting a new foundation here. You walked by faith. Our church prayed and continues to pray for your church.”

“He is starting a new foundation here,” Hale said. “You walked by faith. Our church (Sugar Creek) prayed and continues to pray for your church.”

It was actually First Baptist Church (now the Church at Sugar Creek) that donated the property and funded the building over 100 years ago when St. James built their first church.

The Humboldt Chamber of Commerce assisted in the ground breaking and ribbon cutting ceremony. Executive Director Amanda Love addressed the crowd as well.

“Eight months ago, we thought this day could not come quickly enough,” Love said. “The day has come and we are proud, as a city cannot stand without its churches.”

Dr. Baltimore said during the service that he and Lashlee-Rich, construction manager for the new church building, will be meeting soon. A date to begin construction has not been decided yet but will be coming soon.