Participating teams scrimmaged over two quarters with a 12-minute running clock. In the last two minutes, the clock stopped for all game simulations. Each team had one time out per quarter.

The Pioneers stared the jamboree off with quarterback Payton Lamberson connecting with wide receiver Camron McMackin for a first down at the 44-yard line but, a few plays later Greenfield made an interception to end the Pioneer drive.

Greenfield was flagged with back-to-back penalties to start their first possession and was forced to punt.

Gibson County started the next possession from the 10 -ard line. The Pioneers picked up a first down at the 23-yard line behind back-to-back runs by Jake Patterson. Gibson County moved the ball down to the 49-yard line but was forced to punt. Greenfield took over with 2:48 left in the first quarter and was not able to score.

In the next couple of possessions both teams were unable to score.

On Greenfield’s next possessions, Gibson County’s Austin Fletcher forced the running back to fumble the ball, which Kyle Robison recovered at the 20 with 3:31 remaining in the game. On second down, Lamberson found wide receiver Donte’ Holder for a 20-yard touchdown pass but the two-point conversion was no good.

The Gibson County defense held Greenfield for the remainder of the game for the 6-0 win.

Gibson County Pioneers will kick off the regular season at 7 p.m. Friday against Tipton-Rosemark at Gibson County Yates Field. 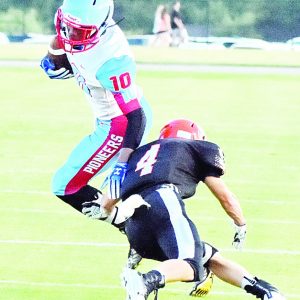