“I Have a Voice” exhibit debuts at Stigall Museum 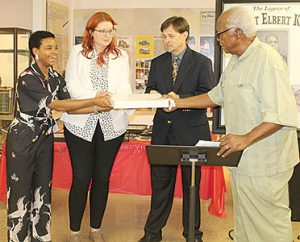 GIFT PRESENTATION – Johnny Cyrus (right) presented a gift to representatives of Tennessee State Museum (from left) Daria Smith, Denise Gallagher and Graham Perry last Thursday night during the opening reception of the Tom and O.E. Stigall Museum and Ethnic Library’s newest exhibit. The exhibit, entitled, “I Have a Voice” is on loan from the Tennessee State Museum. Jones Family of Companies donated the gift for the presentation.

Stigall Museum continues to impress visitors with the quality and relevance of the exhibits they bring to Humboldt.

Throughout the year, the Tom & O.E. Stigall Museum and Ethnic Library board members work to keep the dream of Dr. Freeman alive and active in the Humboldt community. They also make it available to those beyond Humboldt. They have ramped up their community involvement and multiple times per year they begin a new exhibit.

The newest exhibit is part of the Tennessee State Museum’s collection. It is entitled “I Have a Voice” and details the influence of Tennessee African Americans on the music industry.

Graham Perry, curator for Tennessee State Museum, along with two other staff members, were present for the reception commemorating the opening of its newest exhibit Thursday evening.

“You are doing great things at Stigall Museum,” Perry remarked. “I have been

working with the board here for over 10 years and I continue to be impressed and wishing that we had hundreds more like you all across Tennessee.”

Perry talked to those in attendance on how the exhibit came to be. There was a Motown production in run at Tennessee Performing Arts Center in Nashville and Perry was asked to put together an exhibit focused on the accomplishments of Tennessee African Americans in music.

“Tennessee music is much more than the tourist’s story,” Perry explained.

“All music has roots in gospel. It is a little known fact that while the blues was exploding out of Memphis and country from Nashville, much more was happening under the surface. Tennessee musicians were all connected, all across Tenn. and in all points of Tennessee.

“I am sure Humboldt has a music story,” he added. “I would like to know that story as I am learning that even what is displayed here tonight only scratches the surface.”

After a presentation to Perry from Jones Family of Companies by Johnny Cyrus, Cyrus introduced the evening’s final speaker, mayor and self-proclaimed historian, Mayor Sikes. Sikes naturally knew a Humboldt music story that he said needs to be written before those who knew it best are gone.

In 1982 Sikes had the opportunity to visit 106 Calhoun St. in Humboldt. He described it as a little red building where music happened for many years in Humboldt. Live broadcast gospel music came out of that radio station through the use of another local stations airwaves. One of that era’s singers, Dr. Frank Thomas, was on hand that night and offered to share all he knows. 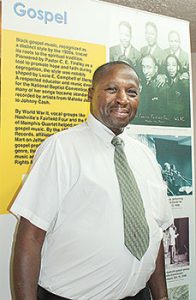 HUMBOLDT HAD A VOICE IN MUSIC – Last week’s opening of “I Have a Voice”, the newest exhibit to go on display at Tom and O.E. Stigall Museum and Ethnic Library brought with it talk of Humboldt’s musical voice. Dr. Frank Thomas was one of many singers who routinely sang at 106 Calhoun St., a location for a Sunday only live broadcasts that are now just a part of history.

After the formal part of the evening, a meal was served and patrons were allowed to view the exhibit. This was one of the largest openings to date with many Humboldt business people in attendance.

OLD 45s – Janice Elam was one of many patrons who enjoyed their time at Stigall Museum last Thursday for the opening of “I Have a Voice”, a traveling exhibit on loan from Tennessee State Museum.