There are faces that routinely pop up in Humboldt all throughout the year when you attend community service activities. One of those faces that always seems to be in the middle of one worthy cause or another is Elna Blankenship. She has a hand in countless activities and more often than not, her grandchildren can be seen with her, learning from a young age that part of a good life is service to others.

Blankenship is a very active volunteer in Humboldt. She epitomizes what it means to serve your community and bloom where you are planted. 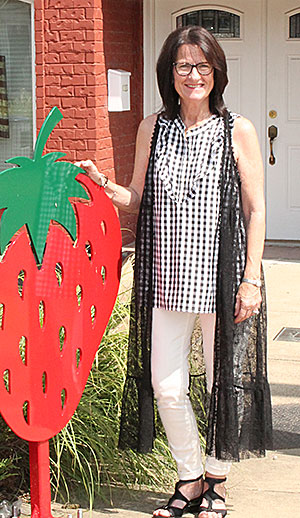 SERVING IN AND LOVING HUMBOLDT – Elna Blankenship fell in love with Humboldt and its residents over 20 years ago. She continues to serve, shop and give to a town that she believes in whole-heartedly.

Blankenship grew up in a small West Tennessee town, a rural area where she grew up as a “tom boy” riding horses and playing ball. Singing was a passion for her from a very young age.

After high school graduation, Blankenship went to college, started a career and raised her family. She was a devoted, busy working mother and her time was consumed with that family and work.

In the 1990s Blankenship married Jim Blankenship, a retired Army Lt. Colonel and moved to his hometown of Humboldt.

Over 20 years ago, her work brought her into contact with the Carl Perkins Center and the Exchange Club. If you keep track of these organizations in Humboldt, you know that Blankenship is still heavily involved with both. She served for seven years as president and after a break from the lead position, she has returned many times over as president. This year’s president is Shannon Ambrose. The Humboldt Exchange Club is in the process of recruiting new members.

“Summer is tough for recruiting,” remarked Blankenship. “People are busy and it is hard to get them to the meetings.” The meetings for the Exchange Club are held the first and third Tuesday of each month at 12 p.m. at the Carl Perkins advocacy center on 22nd Ave. in Humboldt.

Blankenship is excited with the direction that the club is now trending. She can remember the time when there was talk of making the club inactive or merging with the Trenton Exchange Club. These days the club is operating very well. There are three potential members that they hope to announce soon as new members. On August 21 their meeting will be held at Lonnie Cobb’s Humboldt Chrysler.

The Humboldt Exchange Club does many things throughout the year. To know more about what they do, attend a meeting, Blankenship says.

When asked about what brings her the most pride though, Blankenship did not hesitate, “I am most proud that the Humboldt Exchange Club members, in conjunction with the city and other groups, coordinates a week-long celebration to honor our veterans.”

Blankenship has a very tender spot for veterans and her excitement comes bubbling out as she speaks of plans for this year’s events. “They will honor those who served in the Middle East.”  Emma Lindsey, a veteran, will be the featured speaker at this year’s program.  Humboldt”s Boy Scout troop will present the colors at the program.

“I realize I am fortunate to be able to do what I love as when you are doing what you love, it does not seem like any request is asking to much,”  she said.

She has much to give of herself.

In addition to her community involvement, Blankenship is fortunate enough to have family nearby. Her mother-in-law and sister-in-law live in Humboldt. She has a son in Medina, a daughter in Jackson and two stepchildren.

The very mention of her grandchildren brings a sparkle to her eye. Currently she gets to see a bit of herself coming to life again as she indulges the desire to sing in her five year old granddaughter.

Blankenship is a humble servant. With every group she is involved with she has a list a mile long of those (her friends) who work with her to make things happen. She wants none of the credit, but will acknowledge that her life of service is part of following the teachings of Christ.

“My service is through my family, my work and my community,” she said in closing. “Without the efforts of the groups I am a part of, nothing would get done.”