The City of Dyer recently received its new sewer jetter.

The state-of-the-art John Bean SewerJet cost the city $76,000, thanks to a state grant that covered 97 percent of the cost. Its 3500 pounds per square inch (psi) is more powerful than the city’s old jetter (2000 psi). PSI is important as it creates force to unclog lines from things that impede the natural flow in the sewer lines.

The new jetter is fully automatic and even comes with a remote control that the operator can use while several feet away from the machine.

The city used a $368,000 grant, matching 3 percent. Mayor Chris Younger and City Recorder Nathan Reed went to bat for Dyer and obtained the approval for the expenditure after Water Supervisor Randy Gregory made his pitch for the new machine to the mayor.

“The mayor won’t approve anything unless you prove to him why there is a need,” Gregory said.

He said that after you get the mayor on your side, Younger will latch on to your idea like a hound dog.

Gregory said the jetter would be used to clean out lines and unclog blockages throughout the city. Some of the clay sewer lines are old and deteriorating. Additionally, tree roots are working their way into the joints, causing clogs. The new jetter has a special head on it that will, with the force of the water, cut those roots.

“It’s nice, we’re proud of it and we’re thankful we got it,” Gregory said. “We owe it to the mayor and city recorder for working it all out.”

City officials plan to surplus the old jetter to sell on govdeals.com. However, they could sell it the Town of Rutherford, which is looking for an upgrade. 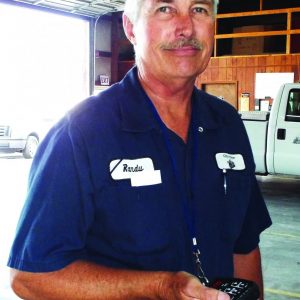