A Rutherford man sustained minor burns Saturday, trying to extinguish a fire at his property.

David Tidwell told Rutherford firefighters he was out front of his building, located at the intersection of North Kay and E. Main in Rutherford, repairing a swing for his mother-in-law when he heard a popping and cracking noise coming from the rear of the building.

Rutherford Fire Assistant Fire Chief Jon Stafford said he could see the smoke from his house outside of the city limits. He called for mutual aid from Dyer and Gibson Co. Fire Dept.

Upon arrival, firefighters found heavy smoke and flames coming from the rear of the structure in a room that had been added on to the building. Firefighters made a quick initial attack on the rear room, keeping the fire mostly contained to the add-on part where the fire started. Firefighters were on the scene for about two hours doing overhaul.

There was no damage to the adjoining business Deluxe Auto Detail.

David and Joe Tidwell own the building. They would like to thank all the firefighters, first responders, EMS, police and anyone else who helped during the fire.

The Rutherford Police Dept. provided traffic assistance, and Gibson County EMS responded for rehab for firefighters. East Main Street was closed during the fire for firefighter safety and because a supply line was run from the closest hydrant. 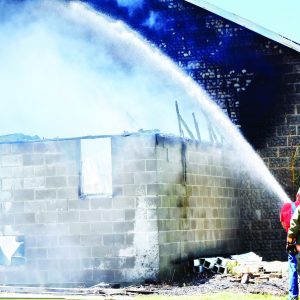