Head Coach Mixon Moore welcomed the crowd of supporters and thanked the parents for all their help this year. Moore began the awards segment by giving a recap of the 2018 season, sharing a few statistics.

The Pioneers finished the season with a record of 9-6-1, dramatically improving from last year’s 1-15-1. They had the first winning season in 13 years and defeated Peabody for the first time ever. The Pioneer had five shutouts with none last year, scored 36 goals in 16 games and only gave up 21 goals for the season. The Pioneers finished runners-up in the Gibson County Soccer Championship Tournament losing to Peabody in overtime.

Coach Moore said, “This season the boys finally answered the bell like I always knew they could.” 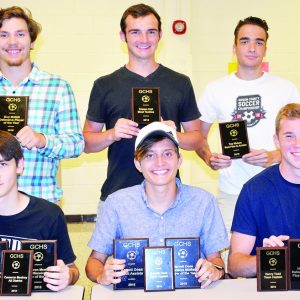