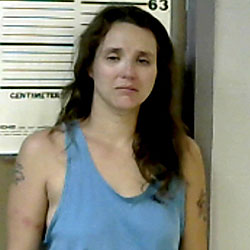 A bank burglary has landed a Humboldt woman in jail. On July 15, 2018, Humboldt police officers were dispatched to Farmers & Merchants Bank on 22nd Ave. in Humboldt in reference to a burglary that happened shortly after 3 a.m. Upon arrival, officers found that the front door glass of the bank had been broken.
After an investigation it was determined that Sherry Louise Bolin, 31 years old of Humboldt, had broken the glass to the door and entered the bank.
Bolin has been charged with burglary and vandalism, and is being held at the Gibson County Criminal Complex in Trenton, Tenn.