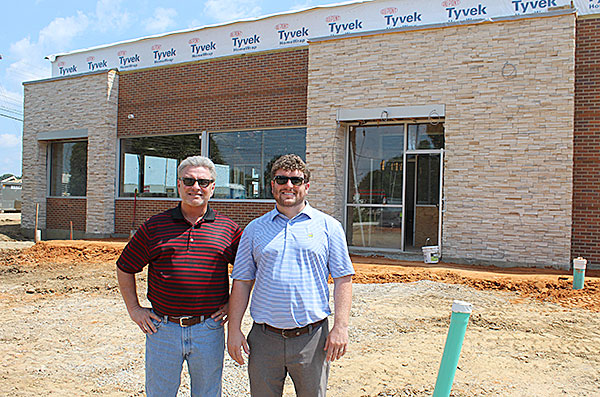 MCDONALD’S ON TRACK – The father and son team of Jeff (left) and Tyler Gamble are eager to get the new McDonald’s open and serving the people of Humboldt and the surrounding area. The previous building was demolished toward the end of April and construction began on the new store within a week. The Gambles are shooting for an August 1 opening date, if construction stays on track.

For those of you who have been craving a Quarter Pounder, McNuggets, McCafe coffee or having a Big Mac attack, soon you will be in luck. The new McDonald’s is set to open in less than a month.

Owners Jeff and Laurie Gamble, and son, Tyler Gamble, are eager to open their doors. Jeff and Tyler have been on site practically every day of the week while the new restaurant is being built.

“The construction project is going good,” Jeff said last week. “We’re right on schedule. And with all the rain we had, they are still getting the work done.”

The Gambles have a similar project with their Corinth, Miss. location. That project hasn’t gone quite as well, according to Tyler. But that store is a totally different project and a different situation.

Plans are to have the Humboldt eatery fully completed by July 26 and open on Wednesday, August 1 as long as work stays on schedule.

The Gambles are planning a community night on Monday, July 30 from 5 until 7 p.m. They invite everyone out to see the new store. There will be no food served that night. People can come and go, see the new dining room with all the new amenities, and view the new kitchen with brand new technology.

Of course all of these dates are subject to change should unexpected construction issues arise.

As of last week, the “bones” of the construction were finished. Now it’s the finishing touches going in, according to Jeff.

“The crews work through the weekends and even holidays,” Jeff said of the hard-working men. “The plumber worked on the 4th of July. The plumber, out of Dyersburg, has done the entire job by himself except for a couple of days when he needed help. Electricians have worked day and night some days.”

Gamble said the first few weeks, construction was only five days a week but after that, they’ve worked seven days a week and on holidays. Plus, some days they work long hours too.

All of this is to get the store up and running, and serving the good people of Humboldt and surrounding area.

The Humboldt McDonald’s closed its doors on Friday, April 20. Demo of the previous building took only three days. By the following Friday, work began on the new building. Tyler noted concrete footings for the new building were poured that weekend.

“Next week (which is now this week) we’ll be installing deco and kitchen equipment,” Tyler said. “Deco is tables, chairs and decorative walls. There will be artwork too.”

This new McDonald’s will have the latest and greatest features including the optimized prep line (OPL). The flow of outputting food will be completely backwards from their previous operations. Jeff said it will be the first of its kind in this area.

“It creates less steps, less bends (for staffers), is more efficient and reduces the noise levels in the kitchen,” Tyler explained the OPL system.

Other new features of the new building include two kiosks for self-serve ordering. People can place their orders and have a seat. When the order is ready, workers will deliver the order to their table.

Speaking of tables, there will be three game tables for the kids to enjoy. One of those tables will be a “sparkle” table where kids can draw on the table of lights.

Not only is the inside totally revamped, the outside has new features as well. There will be side-by-side drive through equipped with digital menus. For pay and pick-up, there are three windows instead of two, like the old building. The first will be a “pay” window. The second is the food pick-up window. And the third will be a secondary pick-up window for orders that may take a bit longer.

Under the old system, customers with longer orders to fill were asked to pull their vehicles forward and park, and a McDonald’s worker would bring their order outside to them. The Gambles said having a third window will be helpful, especially at night for the safety of the workers.

Once the store is up and running, it will stay open 24 hours on Fridays and Saturdays. That could be expanded, Jeff said, if needed when Tyson comes in and is running three shifts.

But for now, the Gambles are keeping construction moving and on pace—counting down the days until they open. You know they are ready to get back in business. And you can bet Humboldt’s hungry citizens craving McDonald’s food are just as eager.