RIBBON CUTTING – LifeFlight’s Matt Flier cuts the ceremonial ribbon officially opening the Vanderbilt LifeFlight air ambulance service in Humboldt last Tuesday. Dozens of well-wishers were on site to welcome them to Humboldt. Although LifeFlight is a Vanderbilt affiliate, they can fly to Jackson-Madison County General Hospital, the Regional Trauma Center in Memphis or the Vanderbilt Hospital in Nashville. 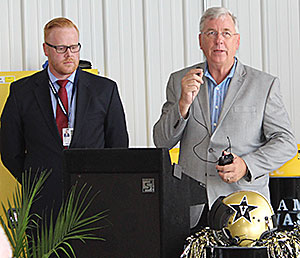 CEREMONY – Humboldt Mayor Marvin Sikes (right) speaks to the crowd during the ribbon cutting ceremony at Humboldt Municipal Airport with the opening of Vanderbilt LifeFlight medical helicopter service. LifeFlight’s Matt Flier emceed the program and provided lots of information about the services offered.

Vanderbilt LifeFlight is officially open for business in Humboldt. A ribbon cutting ceremony was held last Tuesday marking the day.

The air ambulance service is on site at Humboldt Municipal Airport that includes a hanger for the helicopter including a service area, and living quarters for the flight crew and mechanics.

“This is a big day in Humboldt, Tennessee,” Humboldt Mayor Marvin Sikes said during the ceremony. “When you hear ‘Vanderbilt’, you know it’s high quality.”

LifeFlight provides the trained professionals that provide emergency care. Air Methods Inc. provides the helicopters and facilities. The two partner together along with the city providing space at the airport.

Flier said Air Methods investment is $10 million, which includes the aircraft and base.

People may think the medical helicopter would only fly to Vanderbilt Hospital in Nashville, but that’s not the case. Daniel Horne, chief flight nurse for the Humboldt base, said they will fly to Jackson-Madison County General Hospital, Regional Trauma Center in Memphis and to Nashville, determined case-by-case. 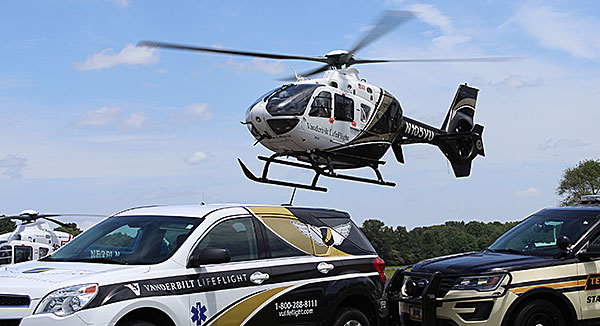 VANDY CHOPPER – The Vanderbilt LifeFlight Airbus helicopter flies into the Humboldt Municipal Airport last Tuesday as part of the celebration and opening of their new base located in Humboldt.

The helicopter in Humboldt is a twin-engine Airbus H-135 with the capability of flying 150 mph, which is faster than most medical helicopters. Inside the Airbus, there is room for 360-degree access for nurses to care for patients. There is also enough room for a family member to travel with the patient.

After the program and ribbon cutting ceremony, everyone attending enjoyed lunch inside the hangar base.

CREW MEMBERS – Vanderbilt LifeFlight crew members are joined by staff of Air Methods. Air Methods provides the medical helicopter, the base and housing for their mechanics, along with the medical staff of LifeFlight. Mayor Marvin Sikes (in gray jacket) welcomes them to Humboldt.