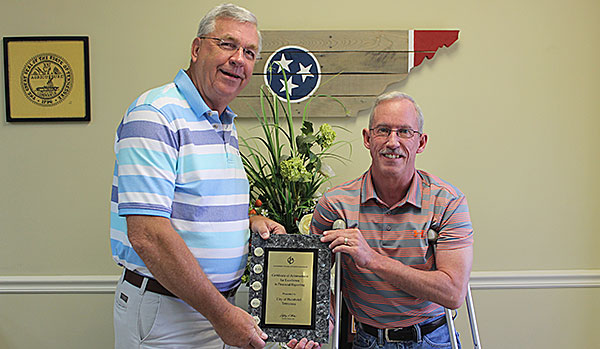 EXCELLENCE AWARD – Humboldt Mayor Marvin Sikes (left) displays the Certificate of Achievement for Excellence in Financial Reporting plaque awarded to the city of Humboldt for the 11th year in a row. Mayor Sikes gives all the credit to city treasurer, Kim Hadley, for his hard work, making sure the city’s finances are always in order.

The city of Humboldt recently received notification of earning an award for financial reporting. Humboldt Mayor Marvin Sikes is proud of the award and gives credit where credit is due to city treasurer, Kim Hadley.

Hadley is the city’s certified municipal financial officer and through his diligent work, the city has earned the Certificate of Achievement for Excellence in Financial Reporting (CAFR) by the Government Finance Officers Association (GFOA) of the United States and Canada.

“This is the 11th year in a row we’ve received this award,” Mayor Sikes said. “And it all because of the hard work of Kim Hadley.”

In a press release by GFOA, the Certificate of Achievement is the highest form of recognition in the area of governmental accounting and financial reporting, and its attainment represents a significant accomplishment by a government and its management. The CAFR was judged by an impartial panel to meet the high standards of the program, which includes demonstrating a constructive spirit of full disclosure to clearly communicate its financial story and motivate potential users and user groups to read the CAFR.

Mayor Sikes said Hadley keeps a keen eye on every facet of the city’s money. The two meet regularly to discuss potential issues within the budget to assure everything is accurate and in accordance with the state comptroller’s office.

“This (excellence award) doesn’t happen by accident,” Sikes noted. “It comes from Kim’s diligence, making sure the city’s finances are in order.”