Wednesday proved to be a lucrative day for the Davy Crockett Cabin in Rutherford. Mayor Bob White and curator of the Chickasaw District Historic Site accepted a $782 check from Tennessee Society Daughters of the American Revolution (DAR) State Chairman Linda Lofton.

The National Society DAR was established on October 11, 1890, and the Tennessee society came soon after on December 18, 1892, with the organization of the Hermitage Chapter in Memphis.

The founding members of the National and State Societies were patriotic women who saw a need for a “patriotic, historical, and genealogical” organization which would carry forward the legacy of the founders of America by preserving historical sites and objects, promoting knowledge of American history and citizenship, and fostering true patriotism and love of country among the American people.

Since that time, the organization has been dedicated to the objectives of historic preservation, education, and patriotism, and their many areas of work reflect those goals.

White then presented each of the chapter representatives with their own hardback copy of “Rutherford Revisited, A History.” White was very appreciative of the donation and ensured it would be put to good use. 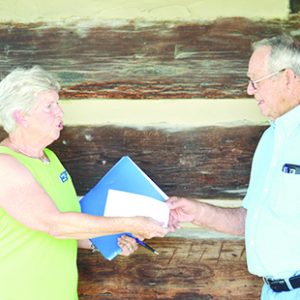