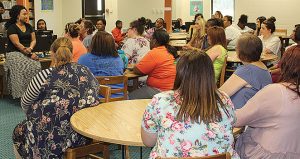 PRINCIPAL INTRODUCTIONS – Two of the new principals with Humboldt City Schools participated in an introduction meeting with their new staffs. Dr. Renette Coleman talks to her teachers and staff last Wednesday afternoon at Stigall Primary School. The purpose of the meetings was to give the principals and teachers an opportunity to meet and get to know each other.

Humboldt teachers got a chance to meet their new bosses at two schools last Wednesday. Jason Newman got a chance to meet his staff at Humboldt Jr./Sr. High School and Dr. Renette Coleman spoke with her teachers at Stigall Primary School during introduction meetings at their respective schools.

Dr. Versie Hamlett, director of schools, introduced each principal and offered a brief history of their education and careers. 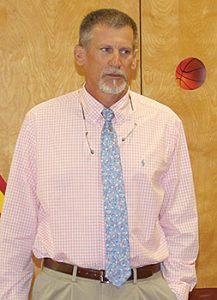 PRINCIPAL INTRODUCTIONS – Two of the new principals with Humboldt City Schools participated in an introduction meeting with their new staffs. Humboldt Jr./Sr. High School principal, Jason Newman, addressed his new staff earlier that morning. The purpose of the meetings was to give the principals and teachers an opportunity to meet and get to know each other.

Newman spoke to his staff, giving a snapshot of his philosophy as a principal and leader of the school. He believes in accountability and discipline for the students when they are not accountable. Newman has experience with alternative school and he will use that expertise here in Humboldt.

He urged his new staff to communicate with him and each other. Newman said teachers must have a short memory. When something goes wrong, deal with the issue, then move on, he told the staff.

One trait he said you have to have as an educator is a sense of humor. Newman said sometimes you just have to laugh at things, good and bad. He gave an example of a set of twins who swapped places one day during a math test. One was good in math, the other was in alternative school. When he found out about the switch, he was asked if there would be more alternative school, which he replied, no. Newman said he like their ingenuity.

Dr. Coleman spoke with her staff in the school library. She took a more upbeat approach, often times bringing humor into the conversation. One instance was talking about brownies, which she said she likes plain—no M&Ms, no nuts, just plain. This broke the ice with her and the staff.

Dr. Coleman urged the staff to come to her

when issues arise. She told them that everyone has to listen; listen to each other, listen to the students, she said.

She offered her staff a few do’s and don’ts, but for the most part kept the talk fun and amusing.

After both principals finished their brief dialogues, there was time for some one-on-one with the staff afterwards.

Newly named principal at East Elementary School, Brittanie Doaks, was in attendance at Stigall. Doaks said she and Dr. Hamlett had discussed doing a similar principal/staff introduction meeting but both thought it was not necessary since Doaks was already at East and promoted to the principal position. Doaks said she already knows the staff.

Dr. Hamlett wants to hold another meeting to introduce all three principals to the community in the upcoming weeks.