Trenton pastors rallied the community to comfort the family of Marlon Anderson and called for peace after the latest gun tragedy.

Anderson, 21, of Trenton, was shot and killed late Sunday, May 28 on Lexington Street near 2nd St. An unknown person took Anderson to the emergency room at Milan General Hospital where Anderson died. He was shot in his abdomen. Police have not made any arrests but have identified persons of interest, Trenton Chief Bill Cusson said.

Cusson said police received multiple reports of shots fired in the area of Lexington between 2nd and 3rd St. but were unable to locate any witnesses when officers arrived on scene. He was hesitant to link the shooting to gang violence but did say the third shooting in the past three or four months creates a challenge for police and the community.

Based on pastors’ remarks at the vigil held in Anderson’s memory Thursday evening, the community suspects gang activity.

Rev. Darrick Theus, pastor of First Baptist Church on Gibson Rd., warned against retaliation and urged anyone with information about Anderson’s shooter to come forward. He said whatever the situation, more violence would only bring more pain.

Theus said he prays everyday that Anderson’s murderer will get no rest until he turns himself into law enforcement.

“Please get yourself together,” Burnett said. “Let bygones be bygone. Forget about the gangs. It’s not worth it.”

Miyoshi Brooks grew up in the Lexington St. area, and she and her husband are now raising two children in the neighborhood. She said explaining Anderson’s death to them was difficult.

“They were asking why,” she said. “It’s a different feeling because I used to know my neighborhood. Still there is connection here. I’m ready for some unity. We need to be together so we can nip some of this in the bud.”

Theus described Anderson as a nice guy who was fun to be around but said Anderson was searching for where he belonged. Theus said Anderson’s family is struggling and looking for closure. They want to see those involved in Anderson’s death brought to justice without anyone turning to more violence, he said.

Cusson addressed the crowd and shared his condolences with the family. He said officers are working diligently to solve the case and said the department needs the community’s help.

“We really want to hear from y’all,” he said.

“We don’t need this kind of tragedy in our community,” he said. He told potential witnesses that they are welcome to talk to him if they aren’t comfortable going to law enforcement.

Theus said intimidation and fear of retaliation often stops witnesses from coming forward. He said anyone afraid or unwilling to talk to police could confide in their pastors or relatives.

Rev. Jerry Moore, pastor of New Springhill Baptist Church, gave a personal plea for anyone involved in drugs or gangs to heed his example.

“I have experienced what this family is going through,” Moore said, alluding to the death of someone close to him. He also said he had done drugs and sold drugs. “I have gambled,” he said. “I have been a womanizer. I have been an alcoholic. I wasn’t in a gang, but I ran with gangs and that’s just as bad.

“Death caused me to change,” he said. “What is it going to take for you to change?”

Anyone with information regarding Anderson’s death is urged to contact the Trenton Police Dept. at 731-855-1413. Lt. Jimmy Wilson is the lead investigator. 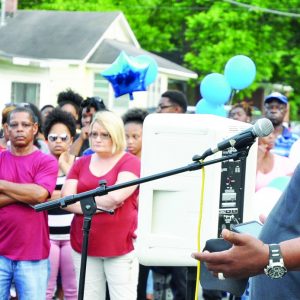