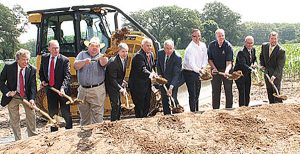 It was a great, historic day for Gibson County.

Leaders of Tyson Foods, Inc., along with local and state officials, gathered at the future site of the company’s new chicken processing plant in the Gibson County Industrial Park. The approximately $300 million project is expected to create more than 1,500 local jobs once the new complex begins operations, currently expected to be in late 2019.

The plant will produce pre-packaged trays of fresh chicken for retail grocery stores nationwide. It is expected to process 1.25 million birds per week, increasing Tyson Foods’ overall production capacity by the same amount. The payroll and payments to farmers from the new operation, along with its purchase of grain and utilities, is expected to generate an annual economic benefit to the state of Tennessee of approximately $150 million.

In addition to the numerous Tyson corporate and local representatives and staff from the Obion County plant, there were farmers, dignitaries and many well-wishers.

“This day represents the culmination of 20 years of vision, hard work and dedication by many leaders and citizens of Gibson County,” said Brock. “Tyson Foods is a world-class company with world-class team members, and Gibson County and Humboldt will be home to the world’s most advanced, high-tech poultry processing plant. The company’s capital investment and job creation will forever change the landscape of Humboldt and Gibson County and create tremendous opportunities for all our citizens, and I could not be happier for all of Gibson County.”

Brock commended local city and county leaders for having

the foresight to purchase the 500-acre tract of land 25 years ago where the industrial park sits today. He also vividly recalled November 20, 2017 as the day Tyson made its commitment to Gibson County.

Deputy Governor Jim Henry spoke on behalf of Governor Haslam, noting that the Tyson plant will be the largest investment in Gibson County history, adding to the four plants and 5,000 employees Tyson already has in Tennessee.

Gibson County Mayor Tom Witherspoon elicited boisterous approval from the crowd when he exclaimed, “Is today a good day in Gibson County or what? I couldn’t be prouder of the team we put together to attract Tyson. It took teamwork to make this day a reality and I’m honored and proud to welcome Tyson to Gibson County,” he said. 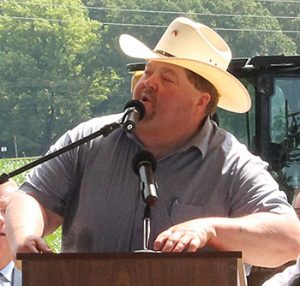 Witherspoon also applauded TDOT, who will soon invest $5,000,000 in a new road in the industrial park.

“Your presence here will have immeasurable impact for years to come,” Mayor Sikes said. “The impact Tyson is going to have will be tremendous for many years to come.” 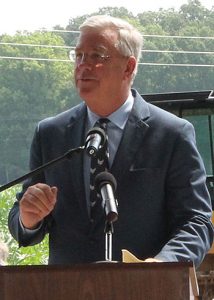 Tyson Group President of Poultry Doug Ramsey spoke of the Tyson members who have been on the ground in this community for the last six months. 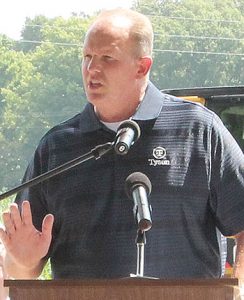 “The Tyson complex will be a community,” he said. “It is all about the people and their families for Tyson. Thank you for inviting us here to do that for Gibson County.”

Tom Hayes, president and CEO of Tyson and leader of the largest food company in the U.S. said the decision to locate in Gibson County had changed the way the company does business.

“We have an amazing opportunity in Gibson County,” Hayes said. “Before coming here, we had an issue with a different community and didn’t want us. That made us step back and take a harder look at how we do things.”

Hayes admitted that while Tyson strives for excellence, everyone makes mistakes. He encouraged community leaders to stay in touch with Tyson; let them know when they make a mistake so that they can correct it.

“We recognize it is not just about the team but the families,” Hayes said. 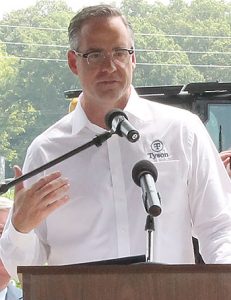 After the announcement, officials gathered with shovels to officially break ground. Tyson plans to open in 2019.

This is the second major economic development project Tyson Foods has initiated in Tennessee within the last year. In August 2017, the company announced an $84 million expansion of its Union City operations, which is expected to create about 300 jobs, in addition to the more than 1,000 jobs currently at the facility. 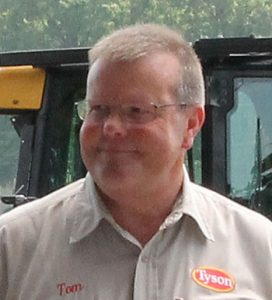 Including Union City, the company currently operates four facilities in the state, employing about 5,000 with an annual payroll of more than $181 million. In its 2016 fiscal year, Tyson Foods paid Tennessee farmers more than $61 million. The company estimates its total statewide annual impact for fiscal 2016, including payroll, grain purchases, utilities, property taxes and charitable contributions to be more than $313 million.