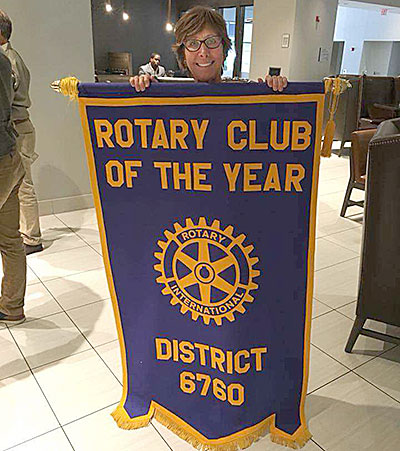 CLUB OF THE YEAR – Humboldt Rotary Club president, Christine Warrington, proudly displays the Rotary Club of the Year banner. for District 6760. The Humboldt club won the award for their many community service projects.

Humboldt Rotarians, president Christine Warrington, president elect Dave Barnett and assistant district governor Tommy Goodrum attended the Rotary International District 6760 Conference. District 6760 includes all of West Tennessee except Shelby County and over half of Middle Tennessee. There are approximately 63 clubs in the district.

The conference was held Saturday, May 19 at the Franklin Marriott Cool Springs. This year’s theme is “Rotary: Making A Difference”. District Governor Jerome Bannister presided over the conference

“A long day of meetings covering items like public image and social media, election of various leadership positions within our district and participation in one of the many service projects Rotary supports ‘Rise Against Hunger’ concluded with celebration for the years success at the Governors Banquet with over 100 participants,” said president Warrington.

“I was absolutely shocked and about fell out of my chair when our club was called,” Warrington said. “Tommy just shook his head in disbelief. I am so proud of the progress we made this year.”

Clubs in the district are divided into small, medium and large with memberships varying from 15 to the largest club in Nashville, the third largest club in the United States at 569. 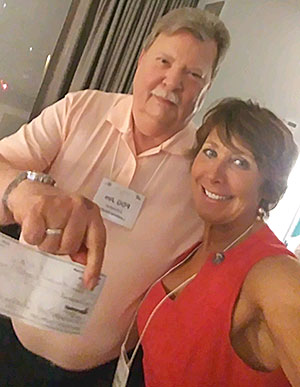 Humboldt’s club falls in the midsize category, which consists of 25-75 members, Warrington said. There were 24 clubs in that category.

“Criteria was based on service project activity and completion of goals,” Warrington added. “The World Polio Day event that live streamed with the Humboldt and Jackson clubs in Humboldt was recognized during the evening. Our growth, including the launch of our corporate plan, our youth services work and the success of our fundraiser as well as our tree planting initiative coordinated with the city parks in Humboldt added to our award.”

“T.O. Lashlee immediately texted me when Dave Barnett put it (Warrington’s picture holding the banner) on Facebook,” Warrington said. “He said we had never been awarded this.”

“I was reminded the banner is only to be kept for a year, and I said, ‘only if we don’t win it again!’ Humboldt is back in so many ways.”