By signing Peabody’s Cameron Luten to a basketball scholarship last week, the Jackson State Community College Generals gained a versatile 5’10” guard. Luten possesses the athletic ability and skill set to play either or both point guard or shooting guard positions.

According to Jackson State Community College Head Coach Kelvin Lester, “The Jackson State coaching staff loves Cameron. He is athletic, quick and gets after it on defense. Also, his court vision helps get his teammates involved in the offense, which is a good asset for a player to possess. We plan to use him at point guard a lot. He can play off the ball as well, because he can shoot the ball well too. He is versatile and we can use him in a multitude of ways. We just look forward to having him in our basketball program.”

Asked about what influenced his decision to sign with JSCC, Luten replied, “I chose Jackson State because some of my friends went there. Signing with the school enables me to continue to play basketball and prepare for a career with the federal police.”

Luten will bring impressive credentials to the Generals’ basketball program. The Peabody team leader started for four years and scored 1,302 points in his career. During his senior season, Luten averaged 15.3 points, 4.3 assists and 3.1 steals per game. In recognition of his performance, Luten was named to the All-District Regular Season Basketball Team.

Peabody Basketball Coach Wes Miller is very familiar with Luten’s talent, because he coached him as a senior at PHS and coached against him for three years when Miller was mentor at South Fulton.

He continued, “Cam did a good job of working with our freshmen and sophomores on ball handling drills. He was always there for them and trying to do the best for them. He makes everyone around him look better. He makes the game look easy.” 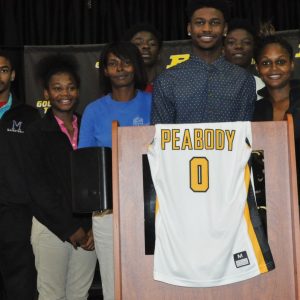