The Gibson County Pioneers ended the season by losing last week, losing to Peabody to finish third in the District 14A Tournament.

Gibson Co. added eight more runs in the second inning with Cameron McMackin hitting a double, and Adam Atkins, Adam Smithson, Colin Warren and Overstreet all hitting singles to extend their lead to 12-0.

Austin Atkins, Dalton Flesher and Weston Branson all combined to throw a shutout. Atkins was the winning pitcher, allowing no hits, no runs, one walk and two strikeouts over two innings. Flesher pitched one inning, giving up one hit, no walks and struck out one. Branson went two innings, striking out one and giving up one hit and no walks. Hitting for Gibson County were Cameron McMackin 2-3 with a double and four RBI; Stephen Overstreet 2-3 with a double and a RBI; Colin Warren 2-3; Sam McKinney 1-2 with a triple; Adam Atkins 1-3; Will Cantrell 1-3; and Adam Smithson 1-4.

Halls jumped out to an early lead in the first inning, scoring three runs on a single and double and added another run in the top of the second to take a 4-0 lead. The Pioneers came out strong in the bottom of the second and scored five runs to take a 5-4 lead. Will Cantrell led off the inning with a triple to left field. Cameron McMackin followed with a RBI single scoring Cantrell. Colin Warren walked, and Caden Wylie hit a RBI single scoring McMackin. Stephen Overstreet hit a two-run homerun over the left field fence to tie the game at 4-all. Adam Smithson singled and stole second and third base and scored on an error to give Gibson Co. a 5-4 lead.

Halls scored two runs in the sixth inning to take a 6-5 lead.

In the bottom of the sixth, Cantrell was hit by a pitch. McMackin and Warren hit back-to-back singles to load the bases with no outs. Overstreet singled to right field to score Cantrell to tie the game at 6-all. McMackin scored on a sacrifice bunt by Adam Smithson to give Gibson Co. a 7-6 lead. Sam McKinney singled up the middle, and Austin Atkins hit a three-run double to deep left field to extend the lead to 10-6. Noah Stafford doubled to left field to score Austin Atkins to make it 11-6 Gibson County.

The Pioneers got on the scoreboard in the bottom of the fourth on a singles by Austin Atkins and Cameron McMackin to make it 13-1 Peabody.

Peabody added two runs in the fifth for the 15-1 win that ended Gibson Co.’s season. Hitting for Gibson County were Will Carson 1-1; Cameron McMackin 1-1 with a RBI; Stephen Overstreet 1-1; Austin Atkins 1-2; and Will Cantrell 1 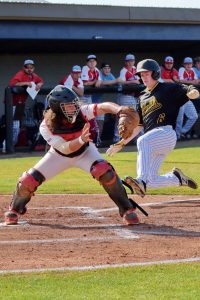