Even though Peabody’s 4-2 loss to Trinity Christian Academy last week in the 14-A District Baseball Tournament championship game ended a streak of four consecutive district titles, the Golden Tide still qualified for a berth in the region tournament.

Peabody (22-10) was bracketed to play in the region semifinal game against Union City, the state’s top-ranked Class A team Monday.

Due to a 4-0 loss to tournament host TCA in an early round game, Trenton was relegated to the losers’ bracket where the Tide battled back to defeat Gibson County 15-1 and TCA 12-2 to advance to the (if necessary) championship game in which PHS fell 4-2 to the Lions.

Evaluating Peabody’s performance in a 4-0 loss to TCA, Tide Coach Todd Lumley explained, “The first game at TCA, we faced their number one pitcher (Lane Lamberth) and he just dominated us that night. We only got two hits and really did not threaten in the game. We got one runner to third base, one time. Actually, (Timothy) Fields pitched very well for us. I was looking at Timothy, maybe, being a relief pitcher, getting an inning here and there. But, because of injuries to other members of our pitching staff, he has really worked hard at it to become our number two pitcher. That is a real tribute to him. He pitched well against TCA. I guess the big hit of the game was a three-run homer. That was a game where the Lamberth kid was very dominant and we were not able to generate much offense against him.”

In TCA’s 4-0 win, Lamberth fired a two-hit shutout and launched a three-run homer to help his cause. He would later be named District Pitcher of the Year. Chipping in Peabody’s hits were Timothy Fields and Landon Pickard. PHS starting pitcher Timothy Fields scattered four hits with six strikeouts in six innings on the mound.

With the season on the line, Peabody run-ruled Gibson Co. 15-1 in an elimination game played on Tuesday. Tide batters put the baseball into play for 15 runs on nine hits and four Gibson Co. errors. Accounting for Trenton’s hits were Hunter Hudson and Josh Parks with two each and Timothy Fields, Landon Pickard, Noah Halbrook and Austin Workman with one apiece. Winning pitcher was Noah Halbrook, who limited GCHS to only five hits, with two walks and nine strikeouts. Managing the Pioneers’ hits were Steven Overstreet, Austin Atkins, Will Cantrell, Cameron McMackin and Will Carson with one each.

“We came back against Gibson Co. and hit the ball extremely well, scoring runs almost every inning. It was a total team effort. Noah (Halbrook) pitched a good ballgame. It was a five-inning game in which he allowed one run. That game was just the opposite of the Trinity game. Hitting can be contagious. If you are going well and hitting the ball, it seems like everything you swing at is a line drive.  On the other hand, it can be contagious if everybody is struggling and pressing. We went from not being able to manage much offense in the first game to barreling up everything we hit. Again, there is no way to explain that other than that is how baseball goes. We played extremely well. We hit and pitched well and played good defense. That was a great effort in that game,” acknowledged Coach Lumley.

The veteran coach continued, “That win put us back into the championship game. I told our players before we left for the game that we were going to play in a championship game and we owed it to our school, the people that follow us, our fans, and to the teams that come and watch us to play like a championship team. I challenged them to play like champions and we did. We came up short in the last game, but it was not for lack of effort, enthusiasm or desire. I was proud of our team for the way the team went into a tough place to play and forced a second game.”

In the first game of the championship series, Peabody roughed up TCA pitchers for 12 runs on 10 hits. Josh Parks’ solo homerun in the third inning was Peabody’s offensive highlight. Parks’ blast cleared the 20-foot fence over the 360-foot sign in dead centerfield. Contacting the baseball were Parks and Pickard with three hits each and Fields, Hudson, Halbrook and Workman with one apiece. Hudson contributed four RBIs. He held TCA to only four hits and two runs in five frames of mound duty.

“In the first game, we continued right where we left off against Gibson Co. We came out early and hit the ball well. One of the things that we had done was put pressure on Trinity. Going all the way back to game one, we scored four runs, but we only got one hit and took advantage of some wildness and errors by Trinity. We never generated a lot of offense against them. I think we pressed a little bit. In this game, when we got to the third inning and put three runs on the scoreboard, I think you could just see us kind of relax. We went up to bat with confidence again and, to me, the fourth inning was the key to the game, because we put a six-run inning together and then added three more in the fifth. When they scored a run in the fourth, we came back and scored to take whatever momentum they had right back. Again, it was a great hitting performance,” noted Coach Lumley.

“From a pitching standpoint, I was proud of Hunter Hudson, he has not pitched in weeks because of shoulder problems. We didn’t know really what to expect. He went out there, threw strikes and put them into play. He gave us the five innings we were hoping for and we were able to end that game in five innings, because of a great hitting performance from the team,” praised the coach.

Due to Lane Forsythe’s solid pitching performance, TCA held off Trenton’s comeback threat to win the championship game 4-2. After throwing a shutout in the first four innings, the 14-A District Player of the Year allowed Peabody single runs in the fifth and sixth innings, but combined with reliever Craft to hold Trenton scoreless in the seventh inning to preserve the 4-2 win. Supplying Peabody’s seven hits were: Fields and Hudson, with two each and Halbrook, Workman and Hammonds, with one apiece. Starting pitcher Austin Workman and reliever Carson Vandiver combined  to limit TCA to  four runs on  six hits, with  six strikeouts and  one walk.

“The second (if necessary) game was one of the most exciting games of the season. Much different from the first game, there was more pressure. Both teams played hard. There was no score going into the fourth inning, but Trinity got a couple of big hits to go up two.  They came back and got two more. I was proud of the way our kids responded. We scored one in the fifth and one in the sixth and had two men on base in the seventh with a chance to tie. That is all you can ask. I think two big plays in that game were defensive plays by Trinity. They had a play where the rightfielder made a diving catch and if he doesn’t catch that it is a triple. That was a huge play. And, during an at-bat with Hunter (Hudson), he did a great job of going to the opposite field with a ground ball, but the second baseman dives and ends up catching it. If that doesn’t get caught, that’s another run. I can’t say enough about Austin Workman going out there and giving us an opportunity to win. Then, we came in with a freshman (Carson Vandiver), who throws two innings,” informed Coach Lumley.

“He added, “I hate it for the kids to give that much effort and not get rewarded, but, again, that is life. They went out and played both games like champions and certainly represented the school and community well in that championship series.”

“Monday’s game on the road at Union City is a great opportunity for us.  We are going to face, according to polls, the number one ranked team in the state. Union City has a great ball club. They will be playing on their field. We are used to playing up there, because we played tournaments up there for so many years. So, we are familiar with the stadium, which is a great place to play. If we go up there and play with the same execution, attitude and desire, we have a shot at them. We will have to play extremely well, because Union City is a very solid team. Our team has the ability to win. It comes down to one game. I tell our kids it is who plays the best when you get to this. You can look at and compare talent, but the team that plays the best will win. So, it is our goal to play as good a game as we can. We will see the results,” challenged Coach Lumley. 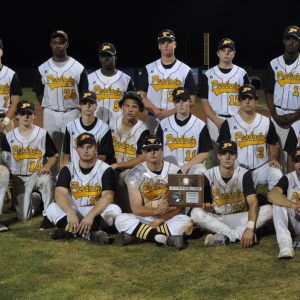