The Gibson County Commission voted Monday morning to table a resolution concerning the possible consolidation of the Humboldt and Trenton court systems.

Sikes offered a scathing review of the resolution and said he believes the intention is to abolish the Humboldt courts in the next four to five years.

“I think the other side has done a good job of telling you how pretty this is,” he said. “Like putting lipstick on a pig, it’s still a pig.”

The resolution, if approved, would ask State Rep. Curtis Halford and state legislators to pass a Private Act to consolidate the courts into one jurisdictional court system within the county. The Private Act would come back to the commission and require a two-thirds majority vote to ratify.

The proposal would have the county maintain a satellite office in Humboldt, and in the resolution, the committee notes Sullivan Co. as the example of how the Humboldt satellite office should operate. The committee suggested an effective date of Sept. 1, 2022 for the proposed consolidation.

Sikes said he believes consolidation is being “fueled by backroom politics and personal dislikes.” He said he had spoken to a judge who said the proposal is ridiculous.

Hughes addressed the commission following Sikes’ remarks and said the current model is one of inefficiency that creates more expense for the county.

“This report is straight forward,” he said. “ It’s honest. There’s nothing mischievous about it at all.”

The committee included a 62-page review of the current court system that was done by Mike Galey of County Technical Assistance Service (CTAS) for commissioners’ review. Galey did not make a recommendation.

During Hughes’ address, Sikes said he did not trust verbal agreements but would consider a contract stating the Humboldt courts would not be closed in the future.

“That’s absolutely ridiculous is what that is,” Hughes replied.

“I think it’s going to cost the county more money than [the legislative committee] is leading people to believe,” Brown said.

Flowers said her biggest concern was that commissioners had not met with her, Brown, or Smith before crafting the resolution.

“I just wish you would sit down with the three judges and clerks before you vote,” she said.

Currently, the Humboldt court system is comprised of circuit court, chancery court, and general sessions court, which are serviced by one clerk’s office. Brown is the Humboldt Clerk and Master; she was appointed by the chancellor to a 6-year term expiring Dec. 20, 2024. Her salary is statutorily mandated as determined by the population of the county and is estimated, with benefits, to be in excess of $100,000. The resolution states the county would honor its commitment to her for the remainder of her term.

The Trenton court is currently comprised of chancery court, circuit court, and general sessions court. The clerk and master is Shonna Smith, who is appointed by the chancellor to serve a 6-year term expiring Dec. 31, 2021. Smith’s salary is statutorily mandated as determined by the county population and is estimated, with benefits, to be in excess of $100,000.

Gibson Co. Juvenile Court also operates in Trenton, and all four juvenile court clerks report to County Clerk Joyce Brown. Flowers serves as Circuit and General Sessions Court Clerk in Trenton and is elected to a 4-year term. She is popularly elected as the Circuit Court Clerk in all jurisdictions except Civil Districts 1, 2, 3, 4, 16, and 20, which are heard in Humboldt. 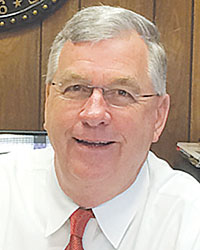 Posted in Trenton Gazette - News, Your Right to Know

PHS Little Theater to be renamed for Berlynne Holman

Your Right To Know