The Gibson County Lady Pioneers made school history last week, capturing the first softball district championship title with a 4-3 win over Halls. The Lady Pioneers defeated Halls 5-4 earlier in the week and beat Trinity Christian Academy 3-2 advance to the District 14A championship game.

In the tournament opener, the Lady Pioneers off to a quick start, scoring two runs in the bottom of the first inning. Senior Ashley O’Daniel walked, Maddie Neal singled, and O’Daniel scored on a single by Zoey Neal. Courtesy runner Molly Lamar stole home to give the Gibson Co. a 2-0 lead.

In the top of the second, Halls scored to make it 2-1. The Lady Tigers took a 3-2 lead in the top of the fourth, but the Lady Pioneers came right back, scoring two runs in the bottom of the inning. Garner led off with a walk, Chloe Hopgood hit an infield single, and Emery Presley laid down a bunt to move the runners. Jaci White reached on an error and scored courtesy run Savannah Allred to tie the game at 3-all. Hopgood scored on a single to left field by Macey Neal to give Gibson Co. a 4-3 lead.

The Lady Tigers scored a run to tie the game at 4-4 in the top of the seventh inning.

In the bottom of the inning, Presley singled, and Savannah Fletcher followed with a double to center field scoring courtesy runner Taina Turner to give Gibson Co. a 5-4 lead.

Lexie Garner was the winning pitcher. She allowed five hits and four runs with three walks and two strikeouts in seven innings. Macey Neal was 2-4 with a RBI, and Savannah Fletcher, Jaci White and Zoey Neal each were 1-3 with RBI. Maddie Neal, Chloe Hopgood, and Emery Presley each had a single.

Zoey Neal led off the top of the sixth inning with a single, and Lexie Garner followed with a single to left field. Savannah Fletcher hit a RBI single to score Zoey Neal and give Gibson Co. the 3-2 win.

Lexie Garner struck out three of the seven batters she faced in the sixth and seventh innings to end the game to advance to the championship game. She earned the win, allowing five hits, four walks, and two runs while striking out six.

For the first time ever, the Lady Pioneers has won the District 14A Tournament.

With one out in the top of the fourth inning, Halls took a 1-0 lead on a solo homerun. The Lady Pioneers answered with two runs in the bottom of the inning. Zoey Neal singled to right field, Lexie Garner singled, and Chloe Hopgood ground out to move the runners over to second and third base. Emery Presley hit a two-run single to plate Zoey Neal and courtesy runner Savannah Allred to put Gibson Co. on top 2-1.

In the top of the fifth, Halls tied the game, but in the bottom of the inning the Lady Pioneers re-took the lead on a single by Macey Neal. Neal went to second on a throwing error. O’Daniel laid down a sacrifice bunt to move Neal to third base with one out. Maddie Neal ground out, scoring Macey Neal to give Gibson Co. a 3-2 lead.

Halls tied the game again in the top of the seventh inning, but Gibson Co. wasn’t able to score in the bottom of the inning and sent the game into extra innings.

In the bottom of the eighth, Jaci White hit the game-winning single to center field to score Hopgood and get the 4-3 win.

Chris Lownsdale said, “I am extremely proud of the girls play over the past three days. With the score almost always being a one-run difference, they showed a lot of mental focus during the games. They continued to find ways to win in each game. It has taken a lot of Lady Pioneers over the years to build the program to this level. This group of girls has put in a lot of time and work to earn an opportunity to play in the regional tournament. I appreciate all of the support from the parents and fans throughout the tournament and the season.”

The Lady Pioneers will faced the Bradford Lady Red Devils in the first round of the Region 7A Tournament May 14.

GARNER DELIVERS –Lexie Garner delivers a pitch to a Halls hitter during the championship game at Halls. Garner was the winning pitcher in all three of Gibson County’s tournament games. (Photo by Lori Cathey)

SINGLE – Senior Ashley O’Daniel singles then steals second base in the first inning during the championship game against Halls. O’Daniel went 2-4 with two singles. (Photo by Lori Cathey)

WAITING FOR THE TAG –Lady Pioneer Zoey Neal waits on a Halls baserunner to put the tag on her for an out in the opening round game of the district tournament. (Photo by Lori Cathey)

TALKING IT OVER – Lady Pioneers infielders Zoey Neal, Jaci White, Chloe Hopgood and Lexie Garner talk over the next play against Trinity Christian Academy in the third inning of the semifinal game Tuesday night. (Photo by Lori Cathey) 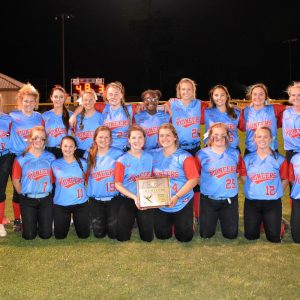