Last week, the Peabody Lady Tide softball team defeated Humboldt 20-5 in the opening round of the 14-A District Tournament.

With the win, Peabody (3-20) advanced to the second round, where the Lady Tide was bracketed to play Halls on Friday.

“We did a lot of things well against Humboldt. We were patient at the plate and they walked a few people and we received timely hits from our key batters. We ended up having a big inning. Actually, we had two of them. So, that ended-up giving us the chance to win the ballgame.

“I don’t know how many strikeouts Caliah Anderson had, but she had several and she didn’t walk many. So, that gave us a chance to limit what few hits they had and hold their scoring down as much as possible.

“Praising offensive performance, Coach Riggs acknowledged, “Again, Caliah Anderson had three hits and knocked in several runs. Also, Sara Carlton had a couple of big hits and Emily Baughman knocked in a few runs as well. So, those three were, probably, were those that were key in RBIs. Everybody that batted got on base. We put pressure on Humboldt by having runners on base the whole game.”

Asked to name the keys for Peabody in the tournament, Coach Riggs, responded, “They are what they have been all year and that is to limit base runners by making them earn their way on base with hits and not giving up errors and walking people. Then at the plate, we have been hitting the ball a lot better in the last four or five games. We will need to stretch out some innings by putting people on base and getting our key hitters up to bat.” 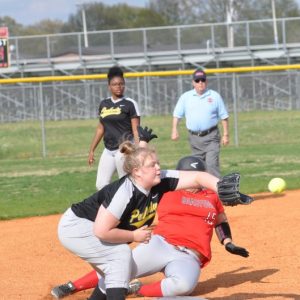