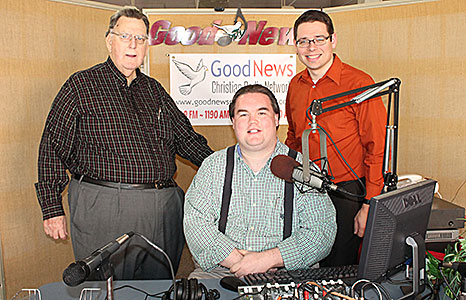 Last month, Humboldt listeners had a new choice for radio. Good News 99.9 FM and 1190 AM hit the airwaves with a new format. The new studio that opened in April, is located in downtown Humboldt at 120 N. 14th Ave.

As part of Grace Broadcasting, these stations focus on local news and content while playing southern gospel. Both stations will simulcast the exact same content.

Each weekday there will be live shows in the mornings and another local show in the afternoon.

Blankenship will host the Morning Show that airs from 6 a.m. until 9 a.m. The show will focus on local community events, church events, news and headlines, scriptures, interviews with local people and other various guests.

From 9 a.m. until 9:30 a.m., Wilkerson will be on the air live hosting On the Record. Each Monday, Humboldt Chamber of Commerce Executive Director Amanda Love joins the show to talk about chamber events, chamber members and other news from the chamber office. Thursdays focus on Humboldt education with Humboldt City Schools’ Emily Burleson and Athletic Director George Yarbro live on the show. The focus on Thursdays is academics, athletics and other programs going on at the schools.

Other days, Wilkerson’s show focuses on local news first and foremost, then county news, and time permitting, state news and national news. Wilkerson will have occasional guests including the mayor, sheriff, chief of police or any number of guests with local news information. On the Record covers a broad spectrum of news including breaking news, fundraisers, crime or any number of events.

Wilkerson also hosts the Afternoon Show from 4 to 6 p.m., just in time for the drive home.

All these shows could not happen without some type of revenue stream. That’s where long-time radioman, Reeves, comes in. Reeves has been in the radio business for decades. He is currently seeking sponsors and advertisers for both the live shows and the music portion of broadcasts.

This week, Blankenship and Wilkerson will be broadcasting live from the Strawberry Festival Junior Floats Parade and Grand Floats Parade. For those unable to attend the parades in person, you can listen to play-by-play of the parades as well as live interviews with festival and other dignitaries.

For those Humboldt sports fans, Good News will have live broadcasts of Humboldt Viking football beginning in August at every game. After football season, the crew will switch to basketball season where they will broadcast game of the week for both the Lady Vikings and the Vikings.

Since Good News’ musical content is southern gospel, Sunday morning is church time. Currently from 8:30 to 9 a.m., Humboldt First Pentecostal Church services are on the air. The Good News team hopes to add other local churches or ministries on the air on Sundays.

And for those outside of the broadcast signal, all programming steams online at goodnewsradionetwork.com.

Grace Broadcasting is growing as well and will soon add 1250 AM out of Covington and 1500 AM in Trenton to boost their coverage area.

Tune in to hear local news from local on-air celebrities and stay in-the-know about Humboldt and the community.